In an ancient world forgotten by time, enormous titans terrorize the land. The five tribes have been fleeing from them for as long as anyone can remember, but things are about to change.

Growing city-states pledge to end the reign of terror, determined to take on the titans and make the world a safer place for everyone. Each city-state competes to attract the tribes, eager for the strength of the combined peoples, with the hope that the titans can be defeated once and for all.

Players compete to grow the largest and most influential city-state by managing citizens, wealth, and military, and by defeating titans. Players take turns sending citizens to take special actions or using military cards to attack titans.

Players can purchase empire cards, which give more citizens, money, and abilities. After six rounds, the player with the most influential city-state wins.

After six rounds, players gain victory points for sets of tribe banners and other special abilities, and the player with the most victory points wins.

The Ancient World is played over the course of six rounds. Each round has 3 phases (prepare, player actions, end of round), executed in order as follows:

Starting with the first player (the player with the first-player token) and continuing in clockwise order, each player may take one action per turn until all players have passed. The available actions are:

If a player places a citizen on an action space that has another citizen with a higher skill number (even one that they previously placed), they must pay 1 coin to the supply. If the player cannot pay the coin, then they cannot place a citizen there.

Ambrosia: As soon as the player places their citizen on the action space, they may collect any ambrosia tokens there. They may use these and any +other ambrosia they have in the current action.

A player may place a citizen on an action space, choose not to perform the action, and still claim the ambrosia.

Empire Cards: Alternatively, a player may place a citizen token on an empire card they own that has an action. Unlike actions on the board, empire card actions may only be used once per round, and only by the player that owns the card unless stated otherwise.

B. Attack a Titan

When a player uses a military card, they place their payment in coins on the name area of the card. This indicates that the military card has been used this round and may not be used again until the next round.

At the end of each round, any coins on the name area of the card slide down to the picture area of the card. This is important because the cost to use a military card is equal to one more coin than is already on the card.

Attack value is gained from military cards used in this attack action as well as from empire cards, defeated titans, and district cards the player owns.

When a player defeats a titan, they take the card and put it to the right of their player board in the row of districts and titans. They turn the next card in the titan deck face up (if they attacked a titan on a deck).

Example: Miriam attacks the titan on Tom's board. The titan has five ambrosia but only two banners, so Miriam takes two ambrosia and discards the other three. Players do not collect ambrosia when defeating titans on their own player boards.


A player may attack multiple titans in the round (not in the same turn), as long as they have at least one unused military card (a military card with no coins on the name area of the card).

Titan cards grant abilities, tribe banners, and capacity when defeated. In story terms, this represents that when a city-state defeats a titan, more tribes flock to the capital, and new lands open up for development.

When a player rolls a titan symbol on a damage die, that player must damage one of his empire cards by flipping it face down. This means that the card does not give any of its abilities until it is repaired.

If a player damages a card with a food, the player does not need to place a citizen in the starving box immediately. The only time players check for starvation is at the end of the round.

If the player damages an empire card that gives an extra army, the player must immediately discard any military cards in any armies that exceed the limit (including retired military cards).

Do not count income, food, card actions, attack bonuses, etc. from a damaged card until it is repaired. Players do not need to discard any citizens gained from damaged cards.

When a player rolls a coin symbol on a damage die, check the effect at the bottom of the titan card and apply it.

If you have no district cards, this has no effect.

Example: Tom has six capacity and six empire cards. He loses a district and now has only three capacity. He does not discard any of his empire cards. But if he wants to build a seventh, he will need to increase his current capacity from three to seven or higher

Citizens on Damaged Empire Cards: If a citizen is on an empire card action and that card gets damaged, keep the citizen on the damaged empire card until the end of the round.

A player may build one empire card that they have stored at the bottom left corner of their player board. The player does not need to use a citizen to do this, but it does take an action. Building empire cards is described on page 10.

If a player cannot or does not wish to attack a titan, build a stored empire card, or place a citizen token, they must pass. Once a player passes, they cannot take any more actions that round. Simply skip players that have passed until all players have passed.

The Capital City on each player board contains some of the resources that each player starts with. The capital city cannot be damaged by a Titan. General Note on Timing: If a card gives a reward (such as a coin) if you perform a specified action, gain that reward AFTER you have completed the action.

When all players have passed, the round ends.

Game End? If six rounds have passed, the game ends and players do not collect coins, knowledge, or ambrosia. Do not refill the board, but players must confront any threatening titans remaining on their player boards AND they must also feed their citizens.

After six rounds, the game is over. Players now count up victory points.

Damaged empire cards are now all repaired in preparation for scoring in the next two sections.

Each player scores victory points for each color of tribe banner they have on empire cards and titans, up to a maximum of 6 banners per tribe. Any banners over 6 in any color do not score victory points.

Finally, each player gains bonus victory points from all special empire cards they have, as described by the scoring text on each card.

The player with the most victory points has the most powerful city-state and is the winner! 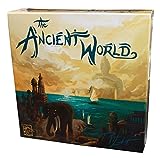