Jenga is played with 54 wooden blocks; each block is 3 times as long as it is wide, and slightly smaller in height than in width.

The blocks are stacked in a tower formation; each story is three blocks placed adjacent to each other along their long side, and each story is placed perpendicular to the previous (so, for example, if the blocks in the first story are pointing north-south, the second story blocks will point east-west).

There are therefore 18 stories to the Jenga tower. Since stacking the blocks neatly can be tedious, a plastic loading tray is included.

Once the tower is built, the person who built the tower moves first. Moving in Jenga consists of taking one and only one block from any story except the completed top story of the tower at the time of the turn, and placing it on the topmost story in order to complete it.

Only one hand at a time may be used to remove a block; both hands can be used, but only one hand may be on the tower at a time. Blocks may be bumped to find a loose block that will not disturb the rest of the tower.

Any block that is moved out of place may be left out of place if it is determined that it will knock the tower over if it is removed. The turn ends when the next person to move touches the tower, although he or she can wait 10 seconds before moving for the previous turn to end if they believe the tower will fall in that time.

The game ends when the tower falls in any significant way -- in other words, any piece falls from the tower, other than the piece being knocked out to move to the top. After pulling out a block, choose someone else to answer the questio

Play alone for practice! Can you top your record height before the tower falls?

All normal rules apply with the following additions: Everyone starts with a chip. â€¦ All players set up the tower together by stacking the blocks. Don't worry if there are gaps, In Jenga TETRIS, gaps are okay!

Try to alternate the direction of the blocks by level. Your levels could look like this:

Now you're ready to play.

Its the classic game of Jenga with a new twist! Caretully pick out blocks and stack them up one by one... without toppling the tower!

So choose carefully and keep those wits about you. If playing the game without any modifications, the detonator/timer can be startling to individual(s) that do not not like loud noises and/or have a heart condition.

If playing on the floor, ensure area is clean and free of debris and/or objects that could injure individual(s).

If playing while standing, ensure area is free of trip hazard(s). Depending on activity level of individual(s) playing, a circular table or table with rounded edges may be best. â€¦

Remove one block at a time from the tower, and then stack it on top of the tower to create a new layer.

The last player to stack a block without making the tower fall wins the game.

Jenga Xtreme is different every time you play! The angled blocks allow you to create a unique tower at the start of each new gameâ€¦and it gets more Xtreme as you play. â€¦

Throw 'n Go Jenga, the 80's hit, is back with the same great play and hot new colors!

Players roll the die to determine which block they need to remove from the Jenga tower. When the tower gets "tippy" you could luck out and roll a Reverse to send play back to the last player. Things will get tricky fast.

Remove blocks from the tower and stack them on top. The last player to stack a block without making the tower fall wins the game. â€¦ The tumble tower set comprises of 51 wooden blocks that is built into a tower.

Any number of players can join in a game of tumble tower and it can also be played alone.

First the tower has to be built. Each wooden Jenga block is three times as long as it is wide (the same for giant jenga as the normal jenga) and the tumble tower should be built to 17 stories high. â€¦ The biggest GODZILLA fan assembles the tower. Using this loading tray, build up the tower by placing layers of three wooden blocks at right angles to each other on a flat surface. â€¦ 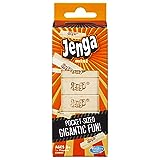 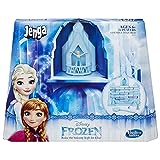 Jenga - How to Play & Playthrough (Skip the Rulebook)