"Commands & Colors: Ancients depicts warfare from the Dawn of Military History (3000 BC) to the opening of the Middle Ages (400 AD). Quite an ambitious undertaking for one game, yet Commands & Colors by design is a unique historical game system which allows players to effectively portray stylized battles from this time in history.

The 15 battles, showcased in the scenario booklet, although stylized, focus on important terrain features and the historical deployment of forces in scale with the game system. The battles include Bagradas, Cannae, and Zama".

"The scale of the game fluctuates from battle to battle. For some scenarios, an infantry unit may represent a legion of fighters, while in other scenarios a unit may represent just a few brave warriors. But the tactics you need to execute conform remarkably well to the advantages and limitations inherent to the various units, their weapons, terrain and time".

"Unlike its older brother, Battle Cry by Avalon Hill (Hasbro), Commands & Colors: Ancients is moderately more complex and contains additional historical details without the battlefield clutter. Most scenarios will still play to a conclusion in less than an hour".

"The battle dice system resolves all combat efficiently and quickly. Each battle die has one Light, one Medium, one Heavy, one Leader, one Flag and one Swords symbol". The Commands & Colors: Ancients game system allows players to portray important engagements of ancient history. The battles, included in the scenario booklet, focus on the historical deployment of forces and important terrain features on the scale of the game system. The scale of the game is flexible and varies from battle to battle. For some scenarios, an infantry unit may represent an entire legion of soldiers, while in other scenarios, a unit may represent just a few brave warriors.

The Command card system drives movement, creates "fog of war", and presents players with many interesting challenges and opportunities, while the battle dice resolve combat quickly and efficiently. The battlefield tactics you will need to execute to gain victory conform remarkably well to the strengths and limitations of the various ancient unit types, their weapons, the terrain, and history. â€¦

The following unit types are all classified as foot units:

The following unit types are all classified as mounted units: â€¦

Only units armed with missile weapons may engage in this type of combat. Heavy war machine units are missile capable. Most green circle symbol units (whether or not they have a white border) have missile weapons. Only Light barbarian Chariots do not. Other types of units may be designated as capable of ranged fire in Scenario Special Rules.

A unit with missile weapons battling an enemy unit more than 1 hex away is said to conduct Ranged Combat (fire) at that enemy unit (the "target unit"). In Ranged Combat, the target unit must be within both range and line of sight of the firing unit. â€¦

The attacking unit determines and rolls the proper number of Close Combat battle dice against the evading unit before it Evades, but only symbols that match the evading unit will score a hit. All other unit symbols, leader, swords, and flags rolled are ignored. â€¦

There are a number of situations when a leader casualty check must be taken. Movement: No movement restrictions for foot units except war machine units, which may not enter a broken ground hex. Any mounted unit or unattached leader must stop when it enters a broken ground hex and move no further on that turn. 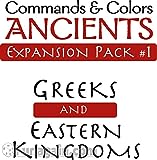 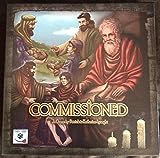 How to play Commands and Colors Ancients

Behind the Theme: Cohesion and Leaders in Ancient Battles (C&C Ancients) (LU43)

Level Up 46: Behind the Theme of C&C: War Elephants and Chariots