The universe is about to collapse, and your final hope lies in an ancient mysterious artifact, the Ovoid. Whoever controls this "cosmic egg" can shape the birthing of the next universe according to their own agenda.

Players are secret agents from a handful of surviving worlds, zipping from planet to planet in special "amnion suits" that allow for interstellar travel, space combat and planetary landings.

Each planet has its own envelope of cards. When you arrive on a planet, you decide which cards you want to take and which to leave behind.

Knowledge is the most powerful resource in the game, and being able to predict the cards your opponents possess at any given time is a powerful advantage as you build up a handful of weapons, tactical gear, vaults and traps, as well as cards that counter your opponents' cards.

The best players will keep their hand fluid, constantly changing tactics while they search from world to world for the Ovoid or find a safe place to stash it.

Balance your hand of cards, spend your turn actions wisely, and cleverly use your special alien powers to stay one step ahead of your opponents.

When the Chaos Clock reaches zero, only the player who possesses the Ovoid will become master of the new universe. 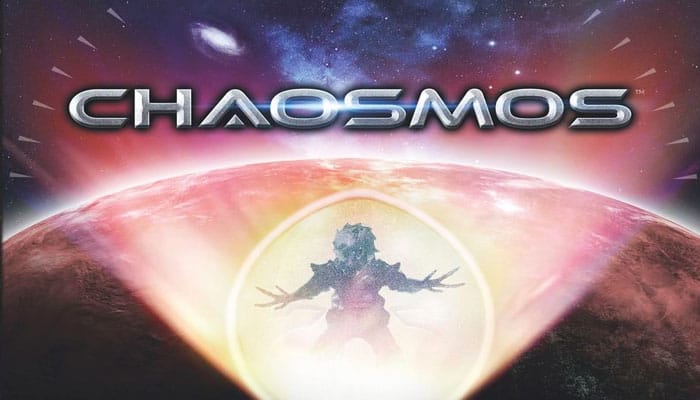 You are a covert alien operative on a secret mission to find the Ovoid and control it when the universe collapses. Your most potent weapon is your ability to bluff, misdirect, and deceive.

Chaosmos is a hidden information strategy game where you explore planets and gather weapons and equipment to find the Ovoid and hide it from your opponents.

You win the game if you have the Ovoid card in your hand when the Chaos Clock reaches zero. …

Banishment teleports you to another planet and ends your turn. In combat, the winner decides where you are banished. When trapped, you are banished to your home planet. (Return any controlled envelope to the box).

Defenses cancel the effects of specific cards on your opponent's side. When you play a defense in combat, it cancels any cards your opponent already played, as well as any cards they play later on in the same combat.

Scrying means privately peeking inside a hand or planet. You may not take any of the cards you see. Ignore flip cards you discover while scrying. …

There are two Ovoids instead of one, so not only will you have to find the Ovoid, you'll have to figure out whether it's a counterfeit!

Discovering the True Ovoid: The Cipher card reveals which Ovoid is real. The other Ovoid is worthless.

Setup: When preparing the Cosmic Pool, deal 8 cards instead of 6. Then randomly add one of the two Cipher cards to the deck, placing the other in the game box without looking at it. Add the Dark Ovoid to the deck, and re-shuffle before dealing envelopes. …