Small World is a fantasy war game with an innovative system of cycling through different civilizations and a nicely polished game system.

Between 2 and 5 players vie for conquest and control of a board which is too small to accommodate all players. The conquest to be the ruler of the world while occupying the most territories is the object of the game.

It's the key to combine each race with 20 unique special powers (like Alchemist, Berserk, Heroic, Flying, Underworld, Wealthy, ..). the best way to expand your empire. Expanding goes by sending troops to weaker adjacent lands or neighbors and killing and occupy those territories.

Small World is one of a few games that track the rise and fall of civilizations over the course of a war game. So be prepared, even when you dominate your opponents, your race's civilization is doomed as well. You must know when you will let it go "into decline" and ride a new one to victory.

A race in decline is designated by flipping the tiles over to their black-and-white side. At the end each turn, you score one coin for each territory your races occupy. You can have one active race and one race in decline on the board at the same time. Your occupation total can vary depend on the special abilities of your race and the territories they occupy.

After the final round, the player with the most coins wins. Small World can be played in a reasonably short amount of time: an hour or an hour and a half.

It has a pretty uniquely European war game design, which means that more time has gone into polishing the game system.

The great thing about Small World is the variety of strategies that come up depending on what Race and Power combinations are available every game.

This leads to a lot of possibilities and constant challenge to your skills to evaluate the races and powers. Remember that not every Race and Power is equal and some are definitely better than others.

The active player can select the first race from the racial queue for free, or he can take a further one by placing a victory coin on each race he skips.

The combat system is fast and simple and no luck is involved. There are simple defensive rules : every piece or unit on a space increases the cost to take it by one.

The rise-and-decline system that underlies everything is what brings the game up to the next level.

This limits your expansion in a clever way as you need more units to take a territory than you need to hold (it does this in an organic way that you scarcely notice).

There's very little randomness in Small World. You take a region by paying 2 race tokens + 1 race token per mountain, opposing race token, or other defensive piece on the space.

You place those tokens you spent in the space you're conquering, and your opponent is forced to take his pieces off the board.

Then it introduces a very important decision point in the game: when you need to push out your old civilization and start a new one.

The game is designed by Philippe Keyaerts and similar to his previous award-winning Vinci which was released by the French publisher Descartes.

Smallworld looks considerably nicer than Vinci, but it also introduces some usability muddiness which can slow down gameplay and every game mechanic change from Vinci to Small World was a good one. The list that follows details the benefit(s) conferred to each race; the number of matching Race tokens received when selecting this Race banner is indicated by the numerical value listed on the banner.

Four of your Amazon (indicated by the +4 on the banner) tokens may only be used for conquest and not for defense.

At the end of each of your Troop Redeployments, remove four tokens from the map, making sure to leave at least one Amazon token in each of your Regions if possible and take these 4 tokens back in hand to redeploy on the map once you Ready your Troops at the start of your next turn. â€¦ Collect 2 bonus Victory coins at the end of each turn. This stops when your race go into Decline.

This is a very straight forward power and decent for all races.

You may use the Reinforcement die before each of your conquests.

Roll the die first, select the region you wish to conquer, then place the required number of Race tokens (minus the die results) there.

If you do not have enough tokens left, this is your final conquest attempt for the turn. â€¦

Welcome to these new maps of Small World and Small World Underground designed for team play with a full complement of 6 players.

The rules that follow describe the game play changes specific to team play, and assume that you are familiar with the rules first introduced in the original Small World and/or Small World Underground.

Note: To get the most out of these 2 maps, if you own them we recommend adding some or all of the additional Small World Races & Special Powers introduced in Cursed!, Grand Dames and Be Not Afraid... â€¦ To play with this expansion, you will also need the following contents from Small World: race banners, special power badges, markers, victory coins, and the reinforcement die.

Note: we strongly recommend that you remove the "Flying" special power before playing with this expansion.

â™¦ After placing the Lost Tribes, place one pirate ship on each River region marked with a pirate symbol. â€¦ It was a lovely spring morning; birds were singing, flowers were blooming, giants were getting new tattoos, and the rest of the Small World inhabitants were preparing for another day of conquest.

An eerie silence settled on the land as a huge shadow glided over forest and mountain. Had the Wizards accidentally given their flocks of sheep flight again?

All eyes turned to the horizon as an archipelago of Sky Islands floated over Small Worldâ€¦and realization dawned at the same time as the sun. â€¦ A Small World Scenario For 3 - 6 Players.

One of the players assumes the role of a dreaded Necromancer who inhabits an island in the center of Small World's central Lake region. He captures the souls of all Race tokens lost to conquests, using them to progressively spawn Ghosts who invade the surrounding Regions.

To make matters worse, his Powers grow as his reach across the land increases. If the Necromancer succeeds in bringing all of his Ghosts into play, anytime before the game's end, he wins! â€¦

Small World is, for lack of a better description, small; there isn't enough room for everyone so conflicts abound as races vie to claim or conquer new territory.

You are in control of those races, and you even get to pick the ones you think will be the most successful. You'll play on a map that looks like this:

There are 2 double sided boards that come with the game. Each side has a map scaled to fit the number of players from 2 to 5. Maps need to ensure the world is small enough to create conflicts, so the 2 player map has much less room than the 5 player one. â€¦

How to get better in Small World The great thing about Small World is the variety of strategies that come up depending on what Race and Power combinations are available every game. This leads to tons of re-playability and constant challenge to your skills to evaluate the races and powers as they come up.

Not every Race and Power is equal, some are definitely better than others. One thing to watch for is when a bad Race/Power combo is getting skipped constantly because the options above are so much better. â€¦ 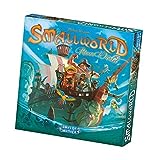 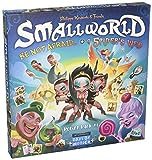 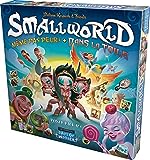 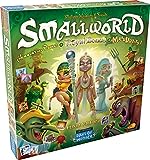 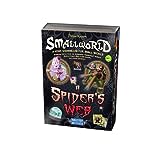 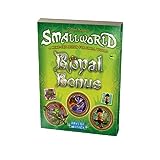 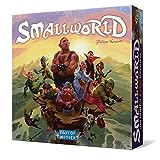 Small World: Be Not Afraid Expansion

Watch It Played - Come LEARN and PLAY Small World with us right now!

Board Games with Scott 057