In two-player games, the following rule is also used:

At the very beginning of each productive season (Phases 2, 4, and 6), roll three dice (of any color not being used by the two players). Use these three dice to "influence" the advisor matching the total rolled. Then, roll two more dice (of another unused color) and place them on an advisor's space in the same way.

If the total of both rolls is the same (and the advisor is already marked with the set of three dice), then instead place the two dice individually on the advisors matching the numbers rolled (if both dice are the same, place one aside for that season).

The two (or three) advisors marked in this way have already been "influenced" for this season (and the players can only influence these advisors by using the King's Envoy).

At the end of the productive season, remove these dice so they can be used again for the next season. 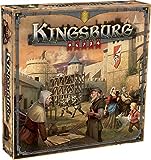