2 Breach Setup: The initial configuration of your breaches. Not all players have the same amount of available breaches.

3 Starting Hand: The five cards which you will have in your hand at the start of the game.

7 Ability: Each breach mage has a unique ability. The player mat explains when that ability can be activated and what it does. Abilities can only be activated when you have a charge token on all of the spaces shown below the ability. Once an ability is activated, all of the charge tokens are removed.

10 Breach Mage Story: Has no effect on play. Provides further lore into the world of Aeon's End.

Breaches are double-sided cards used to prep and cast spells. A single spell may be prepped by placing a spell card from hand to an opened breach during a player's turn. On a subsequent turn, a player's prepped spells may be cast by discarding the spell card.

1 Open/Closed: One side of the card is used to indicate that the breach is open, the other indicates a closed breach.

2 Breach Number: Used primarily during setup to indicate where each breach placed next to the player mat.

), to focus the breach. When a breach is focused, rotate the breach card 90° clockwise. The only time that spells can be prepped to a closed breach is during the player's turn in which that breach was focused. You may open or focus breaches in any order. For example, you may focus Breach III before Breach II, or open Breach IV before opening breach II or III.

5 Opened Effect: Some breaches have effects that occur whenever a spell is cast from that breach while it is opened.

Player cards are the various cards the players can use to build their decks in order to defeat the nemesis. Each player starts with a unique hand and deck of cards. Players will acquire more cards for their deck by spending aether (

) to gain them from the supply piles.

2 Type: There are three types of player cards: gems, relics, and spells.

3 Cost: The amount of aether (

) you must spend to gain this card.

4 Effect: The effect you resolve when you play the card. Gems and relics have effects that are resolved immediately. Spells need to be prepped to a breach before they can be Cast.

5 Flavor Text: Has no effect on play. Provides further lore into the world of Aeon's End.

6 For each player card there is one additional copy that has a grey border. The grey-bordered cards are used during setup to randomly pick which gems, spells, and relics will be in the supply. These cards are not played with during the game.

3 Unleash Effect: The effect that occurs when the Unleash keyword resolves. Each nemesis has a unique Unleash ability.

4 Additional Rules: Any additional rules that pertain only to this nemesis.

5 Increased Difficulty: An optional rule which can be used to adjust difficulty.

7 Nemesis Story: Has no effect on play. Provides further lore into the world of Aeon's End.

8 Setup: Additional information required during setup for this nemesis.

Nemesis cards are the attacks, minions, and powers the nemesis uses against the players and Gravehold.

The nemesis deck is constructed at the beginning of each game from a mixture of basic nemesis cards that can be used in any nemesis deck, and a number of unique cards that are only used with that particular nemesis.

You may encounter the same nemesis many times, but it will never attack you in exactly the same way twice.

2 Type: There are three types of nemesis cards: attacks, minions, and powers.

3 Life: Minion cards have life which can be depleted by dealing it damage. If the life of a minion reaches zero, it is immediately placed in the nemesis discard pile.

4 Effect: The effect to resolve for this nemesis card.

5 To discard effect: Some power cards have a "TO DISCARD:" effect. During any player's main phase, that player may fully resolve the effect listed to discard that power card. If a power card is discarded this way, its effect will not be resolved.

6 Flavor Text: Has no effect on play. Provides further lore into the @ world of Aeon's End.

7 Nemesis: The nemesis to which the card belongs. Cards that say "Basic" may be used with any nemesis. 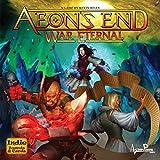