Score the most points by giving three answers before the balls twist down to the bottom of the Timer!

Not sure if Michael Eisner is really a famous Michael, or if George Michael counts as an answer because it's a last name? The group, as a whole, decides if answers are acceptable. You may also look up any questionable answers online.

5 Seconds is up when the balls finish twisting and hit the bottom. The fun "zoop" sound effect is an added bonus and does not "time" anything.

At the end of the established number of rounds, count up your points. Each Card in front of you is worth one point. The player with the most points is the winner!

You've got bragging rights for being quick-witted-until the next time you play and someone else wins!

In the event of a tie: If at the end of the decided number of rounds there is a tie between 2 or more players, there should be a tie-breaking round. Only the tied players play one more round and the person who scores the point becomes the winner. The player in the Hot Seat should be the oldest among the tied players

For longer game play, play more rounds than suggested above. To add a fun twist, you may play as partners (2-person teams). Be careful not to shout answers over one another! 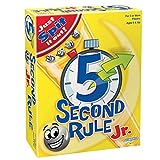