While TriBond is best with 3 to 4 Players or Teams, a 2-player game can be enjoyed by liminating the Challenge and Stealing rules.

Note: We dislike putting a limit on the time allotted for you to answer. Those sand timers that everyone always forgets to turn take the fun out of an otherwise pressure-free game.

However, for those Players that need it (and you know who you are), we suggest a 30-second time limit to answer. 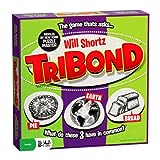