Sort all the Scoring Chips by their type and place them in facedown piles in the center of the table. (5 piles of different types of sushi and 1 pile for dessert).

The game is played in 3 rounds. Each round you will choose 5 Sushi Cards to eat (score).

All players play at the same time.

Each round, you will:

In case of a tie, give the Scoring Chip to the player in second position. If there is still a tie, the chip goes to the next player (and so on).

Example of distributing one round of Scoring Chips.

If one type of sushi has not been eaten (or if all players are still tied after applying the tie breaker rule), then the Scoring Chip for that type is not awarded this round.

Players keep their Scoring Chips facedown, but may secretly look at their values. The numbers on the chips represent how many points you score at the end of the game.

Wild Cards may be played as a copy of any type of sushi as long as you have already eaten at least one card of that type previously this round. Place the Wild Card on top of the Sushi Card that it is copying, it cannot be changed for the rest of the round.

Important: You must decide what type of sushi you are eating BEFORE you reveal your Wild Card. (You are not allowed to wait and see what other players are eating before deciding).

After 3 rounds, the game is over. Players reveal and add up the values of their Scoring Chips, and the person with the most points wins the game. 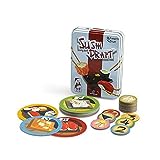 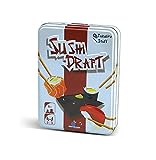