Scythe is an engine-building game set in an alternate-history 1920s period. The game is competitive for 1-5 players. The game takes place on a hexogonal-tiled map of Eastern Europe.

Every player represents a character from one of five factions trying to earn a fortune and claim their faction's stake. Scythe is a complex game as you need to conquer territory, enlist new recruits, get resources, build structures, gain villagers and activate monstrous mechanized robots.

The goal of the game is to earn more coins and achievements. This are simple missions like having a fully upgraded mech, or getting all the top action upgrades done, etc.

At the start, each player begins different resources (power, coins, combat acumen, and popularity), a different starting location, and a hidden goal.

You get 6 wooden stars that will be placed on the central board by completing achievements. i.e. You can build 4 mechs and once you have built them all, you put a star on the board. Win a combat, you get a star. Get your works on the board, you get a star, etc..

In Scythe, the players need also to keep an eye on their popularity. Popularity acts as a score multiplier. The higher you are on the popularity track, the more points you’ll get for your stars, hexes, and resources.

Most of the action don't take place on the main board but on the smaller two-part player board. It has a top half called the leader. This tells you a starting location, your special powers and mech upgrades.

The bottom half has etails what kind of society you have. It tells you actions you can do like moving, trading, production and arming your forces. When you do one of these actions, you can do a second action detailed on the bottom, which is either upgrading your actions, building a building or a mech or recruit a villager.

All these bottom actions upgrade your player board and a building or a mech to the main board.

The combat is driven by choices, not luck or randomness. Even that you can have a lot of conflicts between the players, there is no player elimination.

The game ends if a player can claim 6 achievements. The coins are awarded for the achievements, territory, popularity and resources. The player with the most coins wins.

You can earn coins through general play, but a big chunk of your fortune comes from the stars (achievements) you’ve placed on the board, the hexes you control, and the resources you have produced.

Scythe is a game of exploration, expansion, control and even a little combat. The game offers depth and a lot replayability. The players have almost complete control over their fate and the factor luck is limited (only the "encounter" cards that provides the player several options).

The game is also an area control game and a resource management game. Overall, Scythe is a puzzle and a very good one. The ashes from the first Great War still darken the snow in 1920s Europa. The capitalistic city-state known simply as "The F actory", which fueled the war with heavily armored mechs, has closed its doors, drawing the atetntion of several nearby countries.

With characters from five factions converging onto a small but highly desired swath of land, who will gain fame and fortune by establishing their empire as the leader of Eastern Europa?

Randomly shuffle the Faction Mats and Player Mats, then deal 1 of each to each player. Each player should sit near the home base for their faction with their Faction Mat and Player Mat positioned in front of them; the seating order should be Nordic, Rusviet, Crimea, Saxony, Polania (Clockwise from top). … You are represented on the board by your character, who has been sent on a mission to make your faction's claim to the uncharted lands surrounding the defunct Factory. Each character unit is comprised of a person and their animal companion.

While each of the characters appears to be functionally the same as the others, their unique abilities are manifested in their respective faction and mech abilities. A full backstory for each character can be found on the Stonemaier Games website, but here is a short description of each one: … While empires rise and fall in Eastern Europa, the rest of the world takes notice. Two distant factions, Albion and Togawa, send emissaries to scout the land and employ their own distinct styles of conquering.

This expansion to Scythe adds 2 new factions to the original game, increasing the player count for Scythe as high as 7 players.

Playing with 6 or 7 Players

This expansion allows for up to 7 players to play Scythe.

There are no changes to the map; as would be the case in the real world, the game board is simply more crowded with more factions trying to conquer it. There are two small changes to the rules for 6-7 player games: … Mankind has long been confined to travel by land and sea, but a new technology has emerged from the greatest minds in Eastern Europa: airships. These steam-driven behemoths sail freely across the sky, aiding their empire's expansion through innovation and confrontation.

As the years pass, the world has come to understand that no single faction will rise above the rest for any span of time. In the hopes of decreasing the conflict and increasing the peace, leaders of Europa begin to gather each year to declare a new way for the factions to resolve their differences. …

Scythe: Lessons from the Past

The ashes from the first Great War still darken the snow in 1920s Europa. The capitalistic city-state known simply as "The Factory", which fueled the war with heavily armored mechs, has closed its doors, drawing the attention of several nearby countries. With characters from five factions converging onto a small but highly desired swath of land, who will gain fame and fortune by establishing their empire as the leader of Eastern Europa?

Each episode starts with a brief story that sets the scene for the events that are about to unfold. During the setup process, there will be a number of adjustments players will need to make to prepare for the specific episode or to account for rewards earned from previous games. Finally, at the end of each game, certain players will receive temporary or ongoing bonuses based on who won or achieved specific goals. All of the elements of each episode (story, setup & rules changes, and rewards) are designed to work together to create a cohesive thematic experience in the individual episodes as well as across the campaign. … The first time you set up to play with the expansion, remove cards 5, 8, 18, & 19 from the original Automa deck and replace them with the four new cards provided in this expansion. The removed cards will no longer be used.

If the Automa is playing as Albion or Togawa, place the four Flag or Trap tokens, whichever is appropriate, on the Automa's faction mat. Randomize the Trap tokens and place them face down. You're ready to go. …

Scythe: All Out War Game Rules

In this variant of Scythe, there is an "all out war" that occurs after the standard game ends, where all sides battle for military domination of Eastern Europa. With the All Out War variant, the game is played in two halves; the first half is the standard game which determines the starting situation of the second half of the game, and the winner of the second half of the game determines the overall victor.

The standard game sets the stage for the all out war that follows, with the 1st, 2nd and 3rd place faction receiving mobilization bonuses. … While producing with workers will provide the bulk of most players' resources, trading has some benefits over producing that should not be underestimated. For example, trading for a desired resource is sometimes preferable to moving a worker to a territory that provides that resource. The action that you would have spent on movement can now be used for something more productive. Trading also allows players to access resources that aren't available in their homeland.

Just because an opponent has a lot more power than you doesn't necessarily mean they'll win in combat against you. They don't know how much power you will spend or the amount of power your combat cards will add (combat cards aren't worth anything at the end of the game, so spend them early and often). The puzzle of combat is outwitting your opponent, especially when they think they're going to win. … 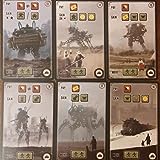 Foam tray value set for the Scythe board game box 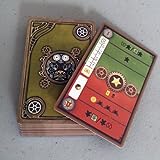 A Feast For Odin Board Game (4 Player) 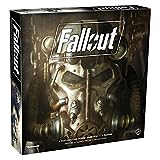 Scythe - How To Play, By Watch It Played

Scythe: Invaders From Afar - How To Play

Scythe: The Wind Gambit - How To Play