It is the late 26th century. Earth is recovering from a catastrophic explosion that exterminated the majority of the population centuries ago and made most of the surface uninhabitable due to unearthly weather conditions.

The surviving humans organized along four radically different ideologies, called Paths, to rebuild the world as they see fit: Harmony, Dominance, Progress, and Salvation. Followers of the four Paths live in a fragile peace, but in almost complete isolation next to each other. Their only meeting point is the last major city on Earth, now just known as the Capital.

By powering up the mysterious Time Rifts that opened in the wake of the cataclysm, each Path is able to reach back to specific moments in their past. Doing so can greatly speed up their progress, but too much meddling may endanger the time-space continuum.

But progress is more important than ever before: if the mysterious message arriving through the Time Rift is to be believed, an even more terrible cataclysm is looming on the horizon: an asteroid bearing the mysterious substance called Neutronium is heading towards Earth. Even stranger, the scientists show that the energy signature of the asteroid matches the explosion centuries ago...

Anachrony features a unique two-tiered worker placement system. To travel to the Capital or venture out to the devastated areas for resources, players need not only various Specialists (Engineers, Scientists, Administrators, and Geniuses) but also Exosuits to protect and enhance them - and both are in short supply.

The game is played in 4-7 turns, depending on the time when the looming cataclysm occurs (unless, of course, it is averted!). The elapsed turns are measured on a dynamic Timeline. By powering up the Time Rifts, players can reach back to earlier turns to supply their past "self" with resources.

Each Path has a vastly different objective that rewards it with a massive amount of Victory Points when achieved. The Paths' settlements will survive the impact, but the Capital will not. Whichever Path manages to collect most points will be the new seat for the Capital, thus the most important force left on the planet... In Anachrony, you are the Leader of one of New Earth's ideological Paths: Harmony, Dominance, Progress and Salvation. Your ultimate goal is to prepare for an upcoming asteroid impact, secure the future of your people, and overcome the other three Paths as the dominant ideology in shaping humanity's future.

The game is played through up to seven rounds, called Eras, each symbolizing several years. After the fourth Era, the asteroid impact occurs, changing how the remaining Eras play out, and triggering the countdown to the game end. â€¦

The Doomsday Module of Anachrony

Playing the Doomsday module, players can truly take humanity's fate into their hands. By conducting various Experiments, they can actively influence the event chain leading up to the Impact, which can potentially lead to mitigating its effects completely.

However, not all Paths share the vision of saving Earth from the second cataclysm - some rather see it as a way to overcome their rival Paths, once and for all...

Experiments and the Doomsday Track

Experiment cards are a major addition to the main game, and symbolize the Paths' efforts to influence the time and effect of the incoming Impact. Each Experiment card consists of a condition, a cost and a Victory Point reward. â€¦

The Chronobot is a solo play variant for Anachrony, playable with the base game only.

Set up a 2-player game, with the Chronobot as one of the players. The following modifications apply to the setup:

With the Alternate Timeline gameplay variant, players can add another strategic twist to the Warp phase.

After setting up the Timeline, turn each Timeline tile to its alternate (crimson-colored) side. Certain Warp slots on this side have bonuses or penalties associated with them.

When playing with the Alternate Timeline, players have to follow the standard player order (clockwise, starting from the First Player) when revealing and placing their hidden Warp tiles.

When it's a player's turn to reveal and place his Warp tiles, he must place them on the first available empty slot(s) in the order pointed out by the arrows. â€¦

Reduce the total cost of this Construct Action by one additional T, U or G (of your choice).

Reduce the total cost of this Construct Action by one additional N.

If you Construct a building (not Superproject) with this Action on the first/second/third building spot of its respective row, you receive 1/2/3 VPs.

If you Construct a Superproject (not building) with this Action, you receive an additional 2 VPs. â€¦

The player(s) with the most Workers at the end of the game receive(s) 3 VPs.

The player(s) with the most Water at the end of the game receive(s) 3 VPs.

The player(s) with the most breakthroughs at the end of the game receive(s) 3 VPs.

The player(s) with the most occupied building spots at the end of the game receive(s) 3 VPs.

The player(s) with his morale marker closest to the right end of the morale track (i.e., highest morale) at the end of the game receive(s) 3 VPs. â€¦

Each Path has two different Evacuation conditions, and each condition consists of two parts:

The Story of Anachrony

The world has changed. It is the 26th century and New Earth is slowly recovering from the Day of Purgation: the day a mysterious, catastrophic explosion shook the entire planet. The majority of the population was exterminated, and most of the surface became uninhabitable.

No one understood what really caused the apocalypse - the only thing the survivors could do was find shelter until the dust settled.

The remnants of humanity organized along four radically different ideologies, called Paths: the peaceful Path of Harmony, living in one of the few surviving cradles of nature blooming with flora and fauna; the stern Path of Dominance, ever cruising the oceans in their huge ship built into a floating metropolis; the cunning Path of Progress, looking down on Earth from their city in the sky; and the devout Path of Salvation, dwelling in huge underground halls and chambers. â€¦ 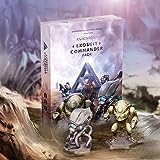