Collect the most money by performing successful "operations".

Remove the rubber band from around the cards and drop it into the anklebone connected to the knee bone gameboard cavity. Make sure no part of it shows above the cavity.

Separate the cards into 2 decks: doctor cards and specialist cards.

Shuffle the doctor cards and place them in a facedown deck within reach of all players. Choose a player to be the banker, who will pay players for successful "operations".

Drop each funatomy part into its matching gameboard cavity. For example, place the heart in the broken heart cavity, and the wrench in the wrenched ankle cavity. Make sure all funatomy parts lie flat inside their cavities.

Choose a player to go first. Play then passes to the left.

All players (including you) look at their SPECIALIST cards. The player with the specialist card for that "operation" now gets to try the same "operation" for a higher fee!

Example: if the Doctor failed to remove Sam's ribs for $200, the Specialist for the rib "operation" now tries it for $400!

If the specialist card for that "operation" is out of play, place the doctor card facedown at the bottom of the deck. Now the player to the left of the Doctor takes his or her turn.

The game ends when all 12 "operations" have been successfully performed. The player with the most money wins!

Before a game starts, players may agree to set a time limit (perhaps one minute) for each "operation". One player (other than the Doctor or Specialist) keeps track of the time.

In this game, an "operation" is successful only if a player completes it before time runs out!

Are you the only "Doctor" in the house? Then practice your skills on the patient! Try performing all 12 "operations" successfully, in any order. If an "operation" is unsuccessful, start all over again!

Storing Your Game Done playing? Store the game parts underneath the gameboard. Anchor the tweezers by resting them in the gameboard peg, as shown below. 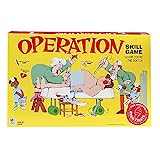