The Mafia business is thriving but there are whispers that the Capo appears old and tired. Time to make your move! Of the five families competing for control of the business, you know that YOUR family is the one that is best suited for leadership.

As you use every Gangster under your control to gain the most respect, others are sure to stand in your way. But it's "nothing personal", right?

Place the board within easy reach of all players. Each player chooses a family and takes the corresponding Player Board. Give each player:

Find the Gangster card "Killer" Mac Pheeto and place him face-up in the Capo position.

Shuffle the remaining Gangster cards. Deal a card face-up into the 8th position (Underboss) then the 7th (Counselor) and so forth in order down to the 4th position (Bean Counter).

If at any time a dealt card is a Gangster type that is the same as any previous Gangsters dealt, (Thug, Hitman, Conman, Gambler) remove that card and deal a new card to that position until it is of a different type than all previously placed Gangsters. Continue this process so that all the Gagsters in positions 8-4 are of a different Gangster type.

Shuffle all remaining Gangster card and deal cards into positions 3, 2 and 1 as well as all three remaining Associate positions.

All remaining Gangster cards are placed facedown where indicated on the board. This forms the Gangster Deck.

Place a Checkmark on the first space of the Phase Track: "The Commission". Place the remaining 4 Checkmarks near the Phase Track. The player who looks most like a mobster takes the Capo Ring and is the First player. If players cannot agree, the first player to say an accurate quote from a Gangster movie goes first.

All unused neutral Influence markers and Coins are placed near the board so that they are easily accessible to all players.

Each player places their scoring token on the "0" spot on the Respect track.

Earn the most respect for your family by controlling key mafia Gangsters in the different organizational positions over the course of five turns.

Nothing Personal consists of five rounds in which players will try to gain the most Respect by controlling key Mafia members. Each round is made up of 6 phases:

After each round, leave the Checkmark on a square space so that everyone knows what round it is. When all 5 spaces are filled on the Bookkeeping phase space, the game ends.

Players take turns in clockwise order, with the player having the Capo ring going first.

In The Commission phase, players use Influence cards to gain control of Gangsters and take other "influential" actions.

Starting with the first player, each player must perform one of the following actions:

During the Influence Phase, all players, beginning with the Capo, take one action or pass in player order. When all players have passed, The Commission phase ends.

A Player may play an Influence cards to add Influence markers to a specific type of Gangster listed on that card (Thug, Hit man, Gambler, Conman).

Play the Influence card and place that number of Influence markers on ONE Gangster that matches the color(s) icons on the card. In addition, follow these rules when placing Influence:

Example: The Chief has an Influence card with a 3 Conman (yellow) icon

but only has two Influence markers. He cannot play the card to place yellow Influence. Meanwhile, Eric has an Influence card with a 3 Thug (purple) icon

and a 1 Gambler (green) icon

Example: Sam has an Influence card with a red "3" that says "Third Guy". He places three Influence markers on the Gangster in the Third Guy position, regardless of who or what type of Gangster card it is.

Players may discard an Influence card and take the action listed on that card.


Second Round of Playing Influence Cards

Players that have not passed in the Influence phase now have a new option available to them: "The Ante".

Any subsequent player who wants to play or discard an Influence card must pay an amount of money that is equal to or greater than the Ante or pass. If the player pays a greater sum, then that sum becomes the new Ante.

If Bob, the next player, wants to play an Influence card he must pay $4 to the bank or pass. Bob decides to pay $4, and adds $2 more, then plays his Influence card.

Steve, the next player, throws his cards down in disgust as he only has $5 and needs to have at least $6 to play more Influence cards. He could discard one of the cards in his hand to get the necessary money, but doesn't want to lose of one of his valuable cards.

When all players pass, The Commission phase ends, and the Checkmark is moved down to the space: "The Crew"

Some Influence cards have other effects - these effects always take place after the Influence markers have been placed.

card, with the special ability, "After placing, must allow one other player to place one Influence on any Gangster".

Any card that says "pay $5 to place an additional influence" must have that extra influence placed on the same Gangster as the rest of the influence given by that card.

Influence cards with this keyword may use their special ability instead of placing Influence markers. Some of these cards are explained in greater detail at the end of the rules.


"Play During The Crew"

In The Crew phase, the following steps occur in order:

Gangsters will not have a controlling player in either of the following situations:


If there is a tie between two or more players for Influence on a single Gangster, the player with the Capo Ring decides which player controls that Gangster. Players may use any methods of their choice to influence this decision. (See: "Negotiation" page 9)

Players can use a "play at any time" card (even in The Crew phase), to add Influence markers to a Gangster to gain control of him. Multiple players can use these cards on the same Gangster during the Influence phase.

If there are disputes when using "play at any time" cards, the cards are resolved by order of the cards played. The first player to play their card places their Influence first, etc.

The Capo Ring moves as soon as a new player has the most Influence markers on the current Capo - even if it is in the middle of a phase!

Starting with the Capo Gangster (#9), calculate how much money and Respect the controlling player receives from the Gangster. It is possible to lose Respect and/or money for controlling a Gangster!

Players may play a Snitch card at any time to immediately send a single Gangster with ten or more Influence markers to Prison. The Snitch card can be used to prevent a controlling player from collecting money and Respect, and from doing a Gangster action.

After each Gangster has had their money and Respect calculated, the Gangsters, in ascending numbered order, may each take one action.


The controlling player of the next highest-ranking Gangster, Second Guy (#2), continues and decides the action of that Gangster. This continues until the Capo takes an action, at which point Phase B ends.

Gangsters can attempt to move to a different position in the organization by "Making a Move". The controlling player may only Make a Move on an adjacent position, as indicated by the arrows on the board. To Make a Move:

A roll showing a

always succeeds, and a roll of a

is always a failure, and also kills the Gangster attempting to make the move.

Success - The Gangster making the move swaps places with the target Gangster.

Turn both Gangsters sideways in their new positions to indicate that they can no longer take actions this turn. (The Gangsters cannot use special powers or attempt another move).

Failure - The Gangsters do not exchange places.

The controlling player loses 4 Respect as a result of the humiliation of failing the attempt. A neutral Influence marker is added to the Gangster attempting to make the move

Death - The active Gangster was caught and killed while trying to Make a Move.

All Influence markers on the active Gangster are returned to their owners. The Gangster is moved to "Sleeping with the Fishes"

Ryan is content in his victory, until Geoff produces $10 to force yet another re-roll!

Example: Bob controls Eric "The Voice" Summerino in the Third Guy Position, while Tom controls a Blackmail Token on Eric. Bob decides to "Whack" the Capo as his action.

Since Tom controls the Capo, he refuses to allow this to happen. Bob instead decides to "Whack" the Bean Counter, who Jim currently controls. Tom tells Bob he will allow this for the low cost of $5.

Since Bob is unwilling to pay this, and he and Tom cannot come to an agreement, Eric cannot take an action this turn.

In The Fence phase, players gain more Influence cards by:

Starting with the Capo and continuing clockwise, each player draws Influence cards based on how many Gangsters their family currently controls:

They may also buy more Influence cards for a cost of $10 each.

Ties are NOT broken during this phase. Each Gangster that ties formore than one controlling player does not count toward any family.


2. Buying from the Fence

After drawing cards, players may buy more Influence cards for $10 each. Players must decide how many cards to buy before drawing them.

All Gangsters are checked to see if they attracted the attention of the Feds! Any sideways Gangsters are rotated to the upright position.

Each Gangster is checked to see if they have attracted the attention of the government. If any Gangster has reached their Influence maximum, they are arrested by the police, removed from play and placed in Prison. All the Influence markers are returned to the players.

The amount of Influence markers needed to send a Gangster to Prison is determined by number of players.

Example: In a 5 Player game, Eric "The Voice" Summerino has 11 Influence tokens on him. During the Feds phase, he is sent to Prison.

At this time, any sideways Gangsters from the "Making a Move" action are now rotated back into their original positions.

The Capo is the first empty position that is filled. The highest-ranked active Gangster remaining on the board moves up to the Capo spot and the player controlling that Gangster takes the Capo Ring.


2. Filling in the Rest of the Positions

Starting with the highest open position then proceeding downwards from Underboss to Third Guy, Follow the directional arrows on the board to complete filling all empty positions on the board, as follows:

No Gangster can be "promoted" to more than one new position. Once a Gangster is advanced, they can no longer be promoted to another position.

The Checkmark is left in this space, on any open square. Take a new Checkmark and place it on the first phase: " The Commission" for a new round. When the 5th Checkmark reaches the "Bookkeeping" space, the game has ended.

After five complete rounds, when the fifth Checkmark reaches the Bookkeeping phase, the game ends. A winner is determined by following these steps:

(include either or both of these)

For a more controlled game, players can agree that all vocal deals must be binding. For example, if Bob offers Tom $7 to Whack one of Ryan's characters, and Tom takes the money - he must follow through.

Start with any Gangsters in the Capo position and others. Simply draw 9 random Gangsters from the deck. 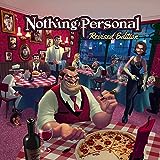 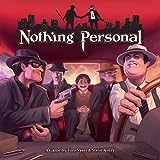