Merchants & Marauders is an unusual dice rolling and hybrid economic board game with a pirate theme. Players take on the role of the Captain of a ship and compete to be first to gain 10 glory points in the Caribbean archipelago.

You can score these glory points by defeating opponents and NPCs in combat, completing missions or rumors, plundering, buying grand ships, buying and selling cargoes, etc.

There is a unique trade system and combat system that offer you to make critical decisions. But the biggest component of the game is wheter to turn "pirate" or remain as a trader or a neutral party.

Being an aggressive pirate is rewarded with bounties being placed on your head. However, pirate players can get quickly powerful and become a real threat to others. The object of the game is to gain 10 Glory Points.

Whenever a point is gained, the player moves a cube in his or her color up the Glory track found on the Game Board.

Glory Points are awarded to players every time they perform various acts of glory and infamy: …

How to do Merchant Raids

If the track contains 8 Merchant Tokens at the beginning of a turn (prior to drawing an Event Card), then blindly distribute them face-down so that each Sea-Zone again has one.

After declaring your intent to "scout" for a merchant, you roll your Scouting skill. If successful, you remove the Merchant Token from the Sea-Zone and reveal the nation on its flip side. …

Bounty Tokens are used as indicators of how wanted you are by the authorities.

You get a Bounty immediately after:

The Bounty you get is always tied to the nation violated. So when engaging a Spanish Merchant you put a Spanish Bounty Token on your Player Board at the bottom of the "Bounty Track" where it says "1" - indicating you have 1 Spanish Bounty. Likewise if you engage a French (non-pirate) Player Captain you get a French Bounty and place it on the "1" space of the "Bounty Track". …

Non-Player Captains (NPCs) are Captains and ships not belonging to any player. NPCs can be either Naval ships or Pirate ships and are physically present on the Game Board as plastic miniatures.

The following describes all the rules governing their behavior.

NPCs are brought into play by Event Cards, such as the "Dutch Naval Ship" and "Pirate Sloop". The Event Card deck holds 12 Admirals (3 of each nation) and 6 Pirates (3 Sloops, 3 Frigates).

Each card holds information on the skill values of the Captains, which is why they are placed face up on a designated area on the board when drawn. …

How to Combat in Merchants and Marauders Once combat begins it continues a number of rounds until a Captain has lost or has escaped. Each round the players declare which combat action they wish to perform (starting with the aggressor i.e. the Captain that engaged the battle). The first round "shoot" is the only available action, but on the subsequent rounds players can choose one of the following actions:

After declaring an action, each player rolls his Captain's Seamanship skill in what is called a Seamanship contest. The Captain who wins the roll (rolls the most successes) out-maneuvers his opponent and gets to perform his selected action. If no Captains get any successes, no one wins - proceed to the next round. … 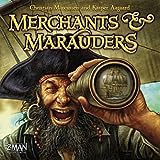 Merchants and Marauders by Z-Man Games 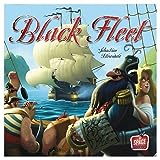