Try to guess the other player's secret code in as few turns as possible.

The younger player will be the first player to set the secret code (codemaker). The other player must guess the code (codebreaker).

Place the game between both players so that the secret code holes face the codemaker. Lift the Rocky Mountain section and place it off to the side for now.

Separate the larger, color-coded animals from the smaller red and white creature scoring pieces. Place the jungle animals in the storage area in the game unit and place the creature pieces in the Rocky Mountain section.

The codemaker secretly sets up a line of 3 jungle animals in the code holes using any combination of the six colors. Then the codemaker carefully places the Rocky Mountain section over the code. The other player-the codebreaker- must not be able to see your code at any time.

The codebreaker must now try to guess the secret code by placing jungle animals in the large holes. Each time the codebreaker places a row of jungle animals, the codemaker will let them know how they're doing by using the red and white creature pieces (see Scoring, below).

Keep each row of jungle animals on the board throughout the game. Looking back at your turns will help you get closer to breaking the code.

For Younger Players: The object for younger players is to guess the colors of animals in the secret code. The codemaker should place one white creature piece in the scoring holes for each jungle animal of the correct color. It does not matter whether it is in the correct position or not.

For Older Players: You must guess the color and position of each of the animals.

White creature pieces: The codemaker place ones of these in the scoring peg holes for each jungle animal that is the correct color, but in an incorrect position.

For Expert Players: The game is played the same as for older players. However, the codemaker may choose to leave one or more spaces blank when setting the code. This means that there are seven "color" possibilities to choose from. You can also use one color more than once.

Use the red and white creature pieces the same way as in the game for older players, treating an empty hole the same as you would a color.

The winner is the player who guesses the opponent's code in the fewest turns.

If you are playing more than one game as the codemaker, add up the number of games each player has won. 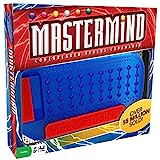 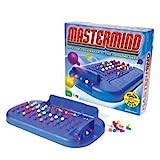