In the year of 1413 - the new King of England, Henry V of Lancaster, pursues ambitious plans: the unification of England and the conquest of the French Crown!

Each player is the leader of their own aspiring noble family. Who will become a true supporter of the young King and thus the most powerful Lord of their time?

Individual components of the players (in 5 colors):

The players want to proceed from simply being a Lord to the most powerful ally of the king. They may achieve this by developing their own knighthood as well as by clever deployment of individual knights in the counties of England, at their own castle and to conflicts with

France. In parliament, they try to push laws from which they will benefit themselves most. The player with the most power points at the end of the game is the winner.

Randomly determine a start player, give them the start player marker. The players take their turns in clockwise direction.

The game is played over five game rounds. Each round consists of 3 Phases:

The active player takes one of their own knights from their court and places him on a knight's space. Then, the next player does likewise, etc., until the players have placed all their knights.

There are possible 3 locations for placing knights:

In counties, a knight can be placed on an empty or an occupied space. In both cases, the knight himself must match or exceed the demanded minimum strength.

Additionally, the player may place as many squires as they wish along with their knight. Each squire adds 1 strength point, which does not count against the demanded minimum strength.

The expelled knight goes back to the court of his owner and is placed again on the board in turn order; put any accompanying squires back to the general supply.

The player places their knight on an empty knight's space in their own castle. Each space can hold only one knight.

A player may engage in as many conflicts as they wish. The player selects a conflict and places their knight on the topmost empty knight's space.

Each player may occupy only one of the three spaces of each single conflict. A player already engaged in a certain conflict may reinforce their strength by stacking their knights.

The first 6 knights earn the "king's favor" for their players. The player selects one favor tile from the open display and receives the shown reward.

Next, reverse the tile; it cannot be selected during this round again. Please see the extra sheet for a detailed summary of rewards.

After the last knight has been placed, the English Parliament is gathering. The players must vote on the 3 new laws, one after the other. They begin with the law of space 1, bottom row left.

All players vote simultaneously and secretly. They decide for or against the law and place the appropriate voting tile face down in front of themselves.

Next, all players may enforce their decision secretly by using as many voting markers as they like. After all players have taken their enforcements in their hand, they simultaneously put the markers on the table and reveal their voting tiles.

The players now tally all votes for and against the law. Each voting tile and each voting marker counts as 1 vote.

The majority wins. In case of a draw, the law is approved. Put all used voting markers back to the general supply.

The new law is approved

Remove the former law (top left, upper row) from the Parliament display. Then, slide both other laws one position from left to right and place the new law on the empty space to the right.

The new law is rejected

Remove the rejected law from the game and leave the former laws unchanged. Use the same procedure for voting on the 2nd and 3rd new law.

Players still holding voting markers after the completion of all three votes return them to the general supply.

Implementation of the 3 applicable laws

After all voting has been done, there are always three applicable laws. They are applied from left to right and the players gain rewards.

Counties, castles and conflicts are evaluated in this order.

All 9 counties yield their rewards from A to I, in this order. The concerned player always must choose one of three options:

After the player has collected their reward, they take their knight back to their court. If the knight was supported by squires, put them back to the general supply.

Special in Surrey (I): Determine the Start Player

In Surrey, the player additionally determines the start player, besides collecting their reward. They may determine any player, including themselves.

Example: Red scores Surrey and assigns the new start player. As his reward, he chooses 2 squires and 2 gold.

First, the start player scores their complete castle, followed by the other players in clockwise direction.

Each player receives the shown rewards for:

The player decides about the order to evaluate their knights and extensions any way they like.

After scoring a knight, the player takes the knight back to their court, scored extension tiles remain at the castle.

Next, the player scores their company at table. For each present nobleman, including themselves, the player receives 1 voting marker. Voting markers are placed on the player's castle tableau visible for all players. The players do not receive voting markers in the fifth, final game round.

Example: Blue scores a knight and an extension tile in his castle: He recruits two squires for his knight. He recruits a new knight with strength 1 because of his extension tile, but must return 3 squires to the general supply.

Finally, the conflicts in France are resolved one after the other and the players gain power points.

Resolving a conflict is done in 2 steps:

Example 1: The winner of this conflict is England (5:5). The raking of the involved players is as follows:

Preparing The Next Game Round:

Prepare the next game round after scoring of all conflicts is complete.

Reveal two new conflict cards and place them in the upper row. All face down tiles "king's favor" are flipped face open.

A final scoring takes place after the fifth game round.

Power points are awarded as follows:

The game ends now. The player with the most power points is the winner of the game.

In case of a draw, the concerned players share the victory.


Note: Knights in the reserve area do not belong to the knighthood.

Hint: If a there is still a draw for the first position after considering the number of squires, divide the 12 power points (8 + 4) by the number of tied players and award them accordingly.

If 1 player holds the first position and several players tie for second position, divide the 4 power points by the number of tied players and award them accordingly. Any indivisible points are lost. 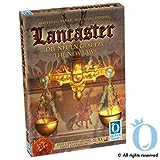