How well do you know your Disney characters? Find out with the Disney Charades Game, which is based on the old Charades parlor game.

The game includes 250 character cards showing both famous and not-so-famous characters (such as Dumbo, Donald Duck, Hercules and Mulan) from movies, original videos, and old cartoons.

There are also 50 color-coded cards with easier-to-guess characters (such as Winnie the Pooh and Cinderella), so younger children will have an opportunity to act out their character assignments.

In each round, team members try to guess as many cards as they can before time runs out. In the first round of play, say anything as a clue.

In the second round, say only one thing. But it's actions only in the third round. Score points for the cards your team guesses before time's up. 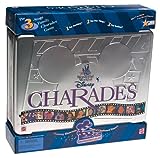