These are hard times: cake is scarce, but Sheepie are plenty. To fairly distribute the cake, the Sheepie are holding a Cake Duel. General Sheepie, you must deploy your troops wisely to take all of the cakes!

What class this Sheepie troop is.

What to call this Sheepie troop.

What this Sheepie troop does when played.

This Sheepie troop has a deep soul.

Unclaimable: Its name must never be spoken.

Shuffle the core deck of 20 cards and deal each player 4 cards. Each player should only look at their own hand.

The player with the best sheep impression starts first as the attacking player. Give 3 cake tokens to that player (P1). Give 4 cakes to the other player (P2).

Set aside the pink special cards for now. Do not put them in the deck.

Duels are played as a set of individual bouts. The first player to win 3 bouts wins the duel!

steal cakes. The goal of each bout is to either take all the opponent's cakes

During a bout, players take turns attacking with Sheepie troop cards to or catch them telling a lie.

Each turn, the active player claims one or more attacker cards facedown to steal cakes.

In response, the other player either claims cards facedown to block the cake theft or challenges the attack 3.

The stolen cakes are transfered. Both players resupply cards, and the bout continues!

A bout consists of many turns. Refer to this chart for the order of actions for a single turn.

End the bout if one of these three conditions are met any time during a turn:

In Cake Duel, all cards are played facedown. To make a play, put one or more cards facedown in the discard pile and claim what they are.

Claiming is announcing the quantity and the name of the cards played. The claimed name can be a bluff.

There are 2 restrictions on claims

Do not flip claimed cards faceup at the end of a turn.

After each claim, the other player has a chance to call a bluff. To do so, say "challenge" and flip the played cards.

Once cards are flipped, the bout ends!

There is one restriction on challenges

A challenge can only happen immediately after the play is made. Drawing cards, making a play, or taking cakes forfeits the opportunity to challenge.

At the end of the turn, resolve the claimed card effects. Then the attacker resupplies, followed by the blocker.

There are three ways to win a bout.

When the bout ends, give the winning player a trophy token, shuffle all the cards back into the deck, and start the next bout with the loser going first. 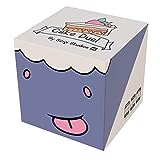