"The Outlaws hunt the Sheriff. The Sheriff hunts the Outlaws. The Renegade plots secretly, ready to take one side or the other. Bullets fly. Who among the gunmen is a Deputy, ready to sacrifice himself for the Sheriff? And who is a merciless Outlaw, willing to kill him? If you want to find out, just draw (your cards)!" (From back of box)

Four different Roles are available, each with a unique victory condition:

A player's Role is kept secret, except for the Sheriff. Character cards are placed face up on table, and also track strength (hand limit) in addition to special ability.

There are 22 different types of cards in the draw deck. Most common are the BANG! cards, which let you shoot at another player, assuming the target is within "range" of your current gun. The target player can play a "MISSED!" card to dodge the shot.

Other cards can provide temporary boosts while in play (for example, different guns to improve your firing range) and special one-time effects to help you or hinder your opponents (such as Beer to restore health, or Barrels to hide behind during a shootout). A horse is useful for keeping your distance from unruly neighbors, while the Winchester can hit a target at range 5.

The Gatling is a deadly exception where range doesn't matter: it can only be used once, but targets all other players at the table! The Deputies incognitos help the Sheriff, but there is also a Renegade pursuing his own goal! In BANG! each player plays one of these roles, and represents a famous Wild West inspired character.

Sheriff: must eliminate all the Outlaws and the Renegade, to protect law and order. … 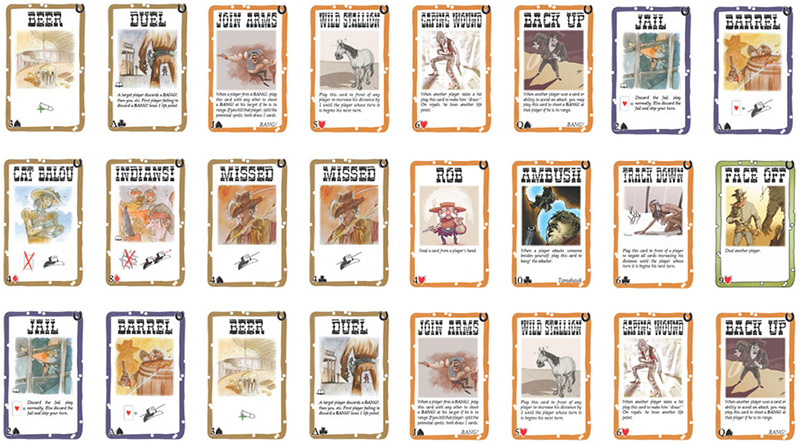 You start the game with a Colt .45 revolver. This is not represented by any card, but it is drawn on your playing board. Using the Colt .45 you can only hit targets at a distance of 1, i.e. only players sitting to your right or your left.

In order to hit targets farther than distance 1, you need to play a bigger weapon: place it over the Colt .45. Weapons can be recognized from their blue border with no bullet holes, black-and-white illustration and the number into the sight (see picture) that represents the maximum reachable distance. …

The Characters of BANG! Each player has his own goal, depending on his role card:

The Deputies incognitos help the Sheriff, but there is also a Renegade pursuing his own goal! In BANG! you play one of these roles, and represent a famous Wild West inspired character.

Sheriff: must eliminate all the Outlaws and the Renegade, to protect law and order. … BANG! Dodge City is a double expansion that will make your BANG! games even more fun and challenging! The box includes the Dodge City expansion, featuring: new characters, new cards, and roles to accommodate up to 8 players!

The second expansion, High Noon, introduces a deck of special cards which change the rules of the game each turn!

You must have the basic set in order to play. You can play with either expansion separately, or you can combine them for even more "wild west" action! … A rich expansion for BANG! It's Gold Rush time! A cascade of gold nuggets will be the reward for the quickest gunslinger! Now you can gain new and extraordinary equipment to help you during a gunfight.

But watch out for the ghastly shadow-gunslingers... they have only one single aim: to blow you away! Can you gallop your way to the richest creek?

Old Saloon is an expansion for BANG! The Dice Game, which includes five "modules". Each module can be added to the base game on its own or combined with the other modules for even more excitement!

The game follows all of the normal rules from BANG! The Dice Game, except for the following changes: … 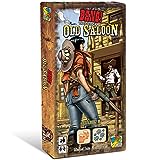 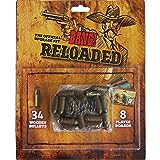 Reloaded, Set of Accessories for The Bang Card Game 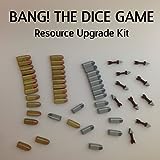 Bang! The Bullet With 3 Expansion Packs

How to Play: BANG!