Apples to Applet KIDS brings the hilarious card and party game Apples to Apples to the entire family. Younger readers will delight in the funny comparisons while expanding their vocabulary and thinking skills.

It's as easy as comparing "apples to apples".. .just open the box, deal the cards, and you're ready for instant family fun! Select the card from your hand that you think is most like the card played by the judge.

If the judge picks your card, you win that round. And everyone gets a chance to be the judge!

Each round is filled with surprising comparisons from a wide range of people, places, things and events. Fast-moving and refreshing, Apples to Apples KIDS is easy to learn and fun to play - it's the perfect game for kids, families and friends!

The judge deals five red apple cards, face down, to each player (including him or herself). Players may look at their cards.

Hold the cards in your hand like this so you can see the card titles.

Occasionally shuffle the red decks together. Also reshuffle the green deck.This will mix the cards and make new combinations.

Experienced players can try these variations:

For a tart twist, choose and judge red apple cards that are the least like, or opposite, the word on the green apple card. For example, you might choose "Whales" when the word "Small" is played.

Invite Mr. Nobody-a great way to add fun when playing with a small group! Each time a judge plays a green apple card, a red apple card is drawn from the top of the stack and played face down along with the red apple cards from the other players.

This card can create some funny comparisons, and sometimes Mr. Nobody even wins a green apple card! 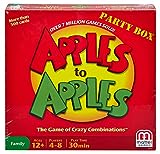 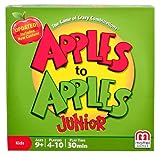