In Villages of Valeria you play the role of a Duke or Duchess, building a village around your castle by playing cards from your hand onto the table in front of you. Develop Resources to build Buildings, which give you Victory Points and special powers.

The right Buildings help you recruit Adventurers, who provide even more Victory Points and special powers. Keep an eye on your fellow players as they will be trying to build a grander village and may even attract the Adventurer you were hoping to recruit.

The player with the most Victory Points at the end wins the game, and their village will become the Capital City of Valeria!

1 Give each player a Castle card and a Player Aid card. Return unused Castle and Player Ad cards to the box; they will not be used. Each player places their Castle card face-up in front of them on the table as the first card in their Village (tableau).

2 Select the starting player in any way you wish, perhaps the person who last built something. Give that player the Active Player Token and the Action Selection Card.

5 Deal 6 cards from the Buildings deck to each player. These cards form the players' opening hands, which they keep secret.

8 In turn order (starting with the active player and going clockwise), each player selects 1 Building card from their opening hand to Develop as a Resource, at no cost. This special round of developing happens only once, at the start of the game.

Note: slide the selected card face-up and upside-down under your Castle card.

Thus, each player will have one Wild Resource (provided by their Castle) and one ordinary Resource of their choice available on their first normal turn.

There are two kinds of cards: Building cards and Adventurer cards.

There are four Resource types: Food, Wood, Stone, and Magic.

The Wild Resource provides the player with any one of the four types of Resources.

When you develop a Building card as a Resource, place it in your Village face-up but upside-down, so that the Resource section is at the top, and slide it under the top of your Castle card.

As you develop more Resources, keep placing them under your Castle in an upward stack, with only the Resource section showing. (Note: The rest of the card no longer matters once a card has been developed as a Resource).

To develop a Resource, either lead the Develop action on your turn or follow that action on another player's turn.

When you build a card as a Building, place it face-up in your Village, to the right of your Castle. The Building's name, Victory Points, and special power (if any) should be visible at the top of the card. We recommend that you group your Buildings by type for easy counting and scoring.

Note: The Building Cost and Resource Type no longer apply to a built Building; they should be J ignored, and it is okay to cover them up.

Buildings provide Victory Points, which are scored at the end of the game.

To build a Building, either lead the Build action on your turn or follow that action on another player's turn.

Important: You may not have more than one Building with the same name in your Village.

Layout Of A Village

Adventurer cards cannot be developed as Resources (they have no Resource section at the bottom). Adventurers can give you valuable special powers, and they can be worth more Victory Points than the average Building.

To recruit an Adventurer, either lead the Recruit action on your turn, or follow that action on another player's turn. We recommend that you group your Adventurers together for easy counting and scoring.

When you discard a card, place it face-up on any of the Building piles. If you discard more than one card, you may choose the same or a different pile for each card.

Example: Helen has 7 cards in her hand, and the Guard Tower in her Village. She follows Rick's Harvest action to draw 1 card, then 1 card for the Guard Towers power, giving her 9 cards. She then discards 1 card at the end of her action.

If a special power allows you to steal cards from an opponent, treat it the same as drawing: take as many cards as you are allowed to steal, then discard down to the limit at the end of your action.

On each turn, the active player takes the following steps, in the order shown:

During earlier turns, Gold coins may have been placed on your Resource cards, either by you or by other players. At the start of your turn, remove all Gold coins from your Castle and Resource cards. Keep the coins; they are yours.

Choose one action by placing the Active Player Token on the Action Selection Card and take the action. This is called leading the action.

After you have taken your action, each other player may optionally follow your action, in clockwise order starting with the player to your left.

When all other players have either followed your action or declined to do so, your turn is complete. Pass the Active Player Token and Action Selection Card to the player to your left.

There are five actions in the game: Harvest, Develop, Build, Recruit, and Tax.

Important: If the action has a cost (for example, the Develop action requires you to discard one or two cards) then the cost must be paid at the start of the action. If you cannot pay the cost, you cannot lead or follow the action.

Important: You may not add duplicate Buildings to your Village.

Building Cost: In order to add a Building to your Village you must be able to pay its Building Cost. Each Building costs one or more Resources. You must provide each Resource by placing one of your Gold coins on a matching Resource card, and/or by using Resource powers.

(Note: We recommend you place your Gold coin on the Gold icon rather than on the Resource icon. Seeing what Resources you have developed at all times will help you plan for future actions).

Example: Helen wants to build the Armory, which costs

Castles and Wild Resources: Your Castle provides you with one Wild Resource. You may spend a Wild Resource as if it were any other kind of Resource: Food, Wood, Stone, or Magic.

Recruitment Requirements: Adventurers will only come to your Village if they feel comfortable there. Each Adventurer shows a requirement of one or more Building Types. Your Village must have Buildings matching those types, or you may not recruit the Adventurer.

Example: Tom wants to recruit the Paladin, which requires him to have a

Building in his Village. He has one of each, meeting the requirements. He leads the Recruit action and pays one Gold coin to the bank, takes the Paladin, and adds it to his Village.

Most Buildings and Adventurers provide special powers after they have been built or recruited. About Special Powers

Some powers are marked as instant with the

icon. These powers are used one time in (and only in) the same action that the Building or Adventurer granting the power is built or recruited.

Some powers are not instant and start with the name of an action. Powers that apply to specific actions, such as Harvest, Build, etc., apply when you are either leading or following that specific action throughout the game. These powers do not apply in the action when the

Building or Adventurer granting the power is built or recruited, but they can be used in any later actions. These powers can be used once per action.

Example: Rick leads the Build action and builds the Wizard's Tower, which has the Build: +

power. He doesn't collect the Gold on this action, but may use this power during a later Build action, whether he is leading or following.

Powers are optional. You may always choose not to use a power. Powers are cumulative.

Example: Tom has the Cathedral, which has the Tax: +

power, and the Oracle, which has the Tax: +

Tom leads the Tax action on his turn, which allows him to use his powers to draw a total of 3 Building cards and to take 2 Gold coins from the bank. Helen has the same 2 Buildings in her Village. She follows Tom's Tax action, draws 3 Building cards, and takes 1 Gold.


When to Use Special Powers

Any power that grants

with or without a cost, is called a Resource power. These resources may be applied when leading or following the Build action, to pay part or all of the building cost. You do not need to place a Gold coin on the card to use the power. You may only use each Resource power one time during an action.

Example: Helen has the Farm, which has the Resource power Build: +

in her Village. She wants to build the Tannery, which costs

Following a Build action, Helen uses her Farm to provide the Food resource she needs to build the Tannery, then adds it to her Village.

All other special powers, including instant

powers, cannot be used until after you have completed the basic action.

Example: Rick has the Barracks, which has the power Develop: +

If you have multiple powers that apply to your action, you may resolve them in any order.

Example: Helen builds the Witch's Hut, which has the power

(immediately discard one card to gain one Gold coin). It was the only card in her hand, but her Village already has the Armory, whose power is Build: +

The game ends after a turn in which any player's Village contains a certain number of Buildings and/or Adventurers, as shown in the table below.

This can happen either because the active player has built a Building or recruited an Adventurer, or because another player following the action has done so.

The entire turn is played out, so even if the active player triggers the end of the game, all other players still get a chance to follow the action and add to their own Villages.

Note: Developed Resources and the Castle do not count toward the total.

Add up the Victory Points

shown in the upper-right corner of each Building and Adventurer in your Village. Resources and cards in hand do not count. Then add Victory Points granted by any special powers that your Buildings and/or Adventurers might have.

(For example, the Knight grants an additional Victory Point for each

Building in your Village).

Finally, add one Victory Point for each Gold coin in your possession (including those on your Resource cards and Castle).

The player with the most Victory Points wins! 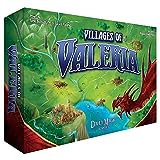