Each player receives 1 random Sailing Ship. The owner of the oldest ship becomes the starting player and takes the Start Player card. Players take their turns in clockwise order.

Before starting to play, each player purchases a steamship from the ship market in anti-clockwise order and deploys it.

Players keep their action cards hidden in their hands.

A player's turn consists of playing one card and executing the related action/s. Played cards are stacked in front of a player in such a way that the last card played is always visible to others. When their Director card is played, players return their stack of played cards to their hands. In the course of the game players acquire additional cards.

Ships are purchased from the ship market and deployed in sea regions. They are the most important source of cash, especially when transporting. In combination with personal markers on the player sheet and neutral ships

in the docks, they also are the main source of Victory Points (VPs). VPs are already gained during the game, for instance when older ships are scrapped, as well as in the final scoring round. In combination with Trade Houses, ships may also gain VPs when transporting.

The game ends after the last steamship is purchased from the ship market. The current round is completed, and one additional round is played.

When purchasing a ship from the ship market the cost is paid to the bank. Its total price consists of the basic price depicted in the red field on the ship itself plus the additional cost depicted under its current position on the ship market.

Finally the market is restored: The ship in the leftmost position is placed inside the docks, the remaining ships move left, and the empty positions are refilled from the stack.

Now the ship market is restored: The DEVONIA (red flag) is in the leftmost position and therefore is placed inside the docks near the Victory Point Chart. The remaining 3 ships move left, and the empty positions are refilled with 3 new ships from the ship's stack.

Playing a corresponding action card, players deploy new ships at the top of the sea regions.

As younger ships (by year of construction) are always located above older ones, a region can only be entered if the new ship is at the same time the youngest inside that region.

As an exception from that general rule, a new ship may be deployed in a position in between other ships, according to their age, if that region still has free spaces left and there is no other region where it could enter at the top.

If a new ship enters a region, all older ships move down one position to accommodate it. If a region cannot contain more ships, the oldest ship is pushed out and has to be redeployed immediately if that is possible (applying the deployment rules from above, the ship's owner decides).

If no redeployment is possible, the ship is scrapped instead. In that case, it may bid farewell by transporting a last time (see: "Transporting with Ships", the owner collects the ship's income and, if appropriate, VPs from Trade Houses). Finally, the scrapped ship is scored in the usual way. The scrapped ship is now out of the game and does not enter the docks.

Special case: Newly purchased ships which cannot enter a region remain with their owner and only score during the final scoring round. If a newly deployed ship is the fastest in the North Atlantic region (or New York), it wins a Blue Riband, and its owner places a respective marker inside his player sheet.

Example: Green deploys the Umbria which finally pushes out the Germanic. In this example she cannot enter on top elsewhere. But as the South Atlantic still has an empty position, she can enter there in between. Green wins a Blue Riband and adds a marker to his player sheet.

The action cards TRANSPORT, REGION, BLUE RIBAND, GLOBAL, CARGO, and CRUISE (= cards marked with a small anchor) allow ships to transport and thus collect income. This is done as follows:

Example: Yellow owns 2 Trade houses in the South Atlantic. By playing the TRANSPORT card the GERMANIC is able to transport.

The GERMANIC loses 1 coal unit and generates an income of £40. In addition Yellow receives 2 victory points for his ship with 2 Trade Houses inside that region.

Read here all detailed information about the action cards.

The SCOTIA is a neutral ship which starts in the North Atlantic (or New York). She always carries coal.

With his personal Director Token a player copies a card from the open display, instead of playing a card from his hand. After using the token once it is out of the game.

The open display does not change; all cards remain in their position.

Even if a column is full, more Blue Ribands or other markers can be acquired. They are placed beneath the player sheet and count 1 additional VP for their respective flag.

They appear on the ship market after the last steamships. They count just like ordinary ships in the final scoring round (depending on their flag). They are purchased like a ship with SHIPYARD and have to be paid with the usual additional costs as written on the board. Additionally, the following rules apply:

The ship's score is the main way to generate Victory Points (VPs). Depending on the situation on the personal player sheet, VPs are gained for ships (and headquarters) of a certain flag.


Additional VPs are gained with the help of ships with a certain flag inside the public docks. As shown here, each blue ship receives 2 VPs extra, each black ship 3 VPs extra, and each green ship receives 1 VP extra.

The dock's VPs are the same for every player.

Scores during the Game

Victory Points (VPs) are tallied with a captain on the Victory Point Chart. While playing the game, VPs may be gained in 3 different ways:

Players gather their ships, either from the regions or still waiting for deployment, together with their headquarters and score them altogether in the usual way.

In addition they receive 1 VP per full amount of £ 100 cash.

Players receive VPs for complete rows of markers they have acquired on the sheet (not for markers already printed). The first row gives 5 VPs, the second row 10 VPs, the third row 15 VPs, and the fourth row 20 VPs.

In addition, each marker in the uppermost incomplete row scores as follows: 1 VP if it is the first row, 2 VPs if it is the second, etc.

The player sheet as depicted would score a total of 21 VPs.

All VPs are tallied with a captain on the Victory Point Chart. Whenever reaching 50 VPs, the player places a respective VP marker at the chart.

Winner of the game is the player with most VPs.

In case of a tie, the owner of the youngest ship wins that tie. 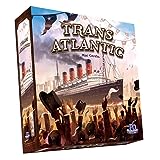