An alert pops up on your phone: A crime has just been committed! Grab your investigator's license and your keen powers of deduction and hunt down the thief.

But watch out, because you're not the only private eye on the hunt, and only one of you can slap the cuffs on the thief and claim the reward. Get enough reward money, and you can finally leave this rat race behind and retire to a sunny tropical beach in the Caribbean.

In Stop Thief!, players play private investigators trying to catch a thief secretly moving around the board. The thief does not physically appear on the board - the app keeps track of where the thief is and how they are moving and plays sounds to give clues about their location.

Use the sound clues to figure out where the thief is, then move there and arrest the thief, earning your reward.

Note: You will also need an electronic device such as a smartphone or tablet and the Stop Thief! module in the Restoration Games app.

Be the first player to collect enough cash to retire. The amount needed changes based on the number of players.

Players take turns clockwise around the table. On your turn, do the following three steps in order:

Press the GET A CLUE button on the app. The app will play a sound for everyone to hear - that's your clue to start figuring out where the thief is. The clue is not secret, so if someone missed it, you can replay it.

Rules for the thief's movement (in the standard game):

If that happens, take $1,000 from the bank and place it on the thief card. This is an additional reward for catching such a dastardly criminal.

Play a card from your hand onto the table. You may move a number of spaces up to the amount shown on the card.

Some cards have a special effect on them that will let you use its power before, during, or after your move. You do not need to move the full number of spaces on the card, and you are not required to do the effect.

Get to know the gameboard

The sound you hear tells you the new space that the thief went to:

Inside a building sound: footsteps.

(In the standard game, thieves treat subways as regular outside spaces).

Outside a building sound: hubbub.

If you hear hold music, it means the thief stayed still.

Unnumbered circle spaces are only used by investigators - thieves skip over them.

Note: Thieves and investigators can move in either direction on the paths, regardless of which direction the footprints point.

You may attempt to make an arrest on the space you are on or any adjacent numbered space. Press the attempt an arrest button on the app. The number of the space where you are attempting the arrest is public.

Announce the number of the space you think the thief is on and enter it in the app. The app will then tell you if you are right or wrong.

An investigator on this spot could choose to attempt an arrest on space 333 or space 324 (but nof 332 - it is not adjacent).

After a successful arrest, if the game is not over, the player to your left starts the next round, with investigators continuing from their current spaces on the board. Discard the card of the thief who was caught and reveal a new one.

The first player to get enough cash to get out of this two-bit job is the winner.

Since 1979, technology has advanced just a teeny, tiny bit. While the big blocky Crime Scanner was a marvel of its time, we can now do what it did in an app-and a whole lot more.

By using an app, we are able to update the game after you already have it, including whole new ways to play. The app will tell you what different ways there are to play and how to play them. 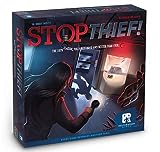