Sort and shuffle the question cards from 4 categories.

Place the cards in the card box and insert the relevant category divider between each category.

The question cards have a yellow and a green side. First, the yellow sides should be played. Once all the yellow cards have been read, you can start with the green sides of the cards.

Similar happens with the questions. First, all top questions must be read, then the rest.

Finally, each player selects a numbered token and places it on the starting square.

The players must try to land on "the end" on the Smart Ass's butt.

A starting player is now chosen and he rolls the category die (colored die). Usually, the oldest smart ass player is chosen to be the reader of the first question.

The color rolled is the category from which the question is to be asked:

Then a question is being asked from that category and every player can yell out an answer at any time, but they can do this once.

If no one answers the question correctly after the last clue is given, then the player who asked the question wins the round.

The player who won the round can roll now the numbered die and moves his token according to the number rolled.

At the end of each round, play moves clockwise with the next player asking the next question until the game has been won.

Sometimes, two players answer the questions at the same time. Then honesty by players is needed in determining who gets the correct answer out first and the decision is adjudicated by the person who asked the question.

If no player can be separated as the winner, then a tie-breaker question (from the "hard ass" category) is needed to be asked.

The first player to answer this question correctly will win the round.

If none of the tied players can answer the tie-breaker question, then the player who asked the question wins the round.

The first player to land on the target on the Smart Ass's but is the winner.

The correct number rolled is not needed, the player just needs to roll enough spaces to reach "the end". 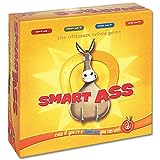 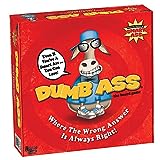 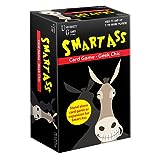