You are a seasoned archaeologist who is competing against your colleagues to find the most Scarabs relics. These golden beetle amulets are extremely valuable as they can help solve ancient mysteries about the long-gone civilizations that created them.

They are known to be scattered across the world: buried in the Egyptian desert, hidden deep in the Amazon rainforest, immersed in the Bermuda Triangle, and frozen in Antarctica.

To find them, lead your team on an expedition to set up camps and mark out areas of excavation. Will you be the archaeologist who finds the most Scarabs and uncovers the mysteries of Scarabya?

Strategically position your Tiles to outline excavation areas that surround point-earning Scarab Symbols. An excavation area is a group of 4 squares or less that is surrounded by Tiles, Rocks, and/or Frame.

Uncovered Scarab Symbols are worth 1 to 4 points each, depending of the size of the excavation area they are in. Scarab Symbols hidden by a Tile, or located in areas larger than 4 squares, do not earn points.

The player with the most points at the end of 12 rounds wins the game.

The game is played over 12 rounds.

At the start of each round, the Great Explorer draws a Mission Card. This card indicates which Tile players must place that round.

All players will then pick up the indicated Tile and simultaneously position it on their Archeological Site, wherever they want, following the Layout Rules. Players then collect any Scarab Tokens they have earned in the round following the rules stated under Collecting Scarab Tokens.

Scarab Symbols can be covered by a Tile, but will not score any points.

If a Tile can be placed on the Archaeological Site, it must be played.

If a Tile cannot be placed, it must be discarded.

Example: A player creates an excavation area made up of 4 squares that contains 2 Scarab Symbols.

On each of these symbols, they place a Scarab Token worth 4 points (if all 4-point tokens have been used, they use 4-point token and add a 1-point token).

The round is over when all players have placed their Tiles and the Scarab Tokens they have earned, on their Archeological Site. Then, the Great Explorer flips the next Mission Card and a new round begins.

The game ends after the 12th Mission Card has been drawn, the corresponding Tiles have been played, and any earned ScarabTokens have been collected on each player's site.

Each player then counts all the points from the Scarab Tokens they have collected. The player with the highest point total wins the game. In the event of a tie, the players share the victory. 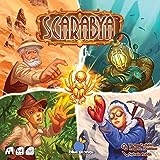