San Juan is a city building card game based from the board game Puerto Rico.

The game is played over several rounds. In each round, each player chooses one of different roles (Producer, Prospector, Trader, Councilor or Builder) and all players take the corresponding action in clockwise order.

With the money earned from such sales, players can build buildings like palaces, poor houses, silver smelters, gold mines, and many others – each with its own special features. The players select a s tarting player using any method they want. He takes the governor placard. Place the 5 role placards next to each other in the middle of the table.

Shuffle the 5 trading house tiles face down and place them in a stack face down next to the trader placard. … 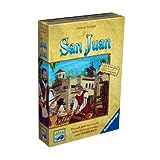