Teams have 1 minute to guess puns from the 6 clues on each card.

Teams score points by guessing the puns correctly or stealing puns that aren't answered by the other team.

The first team to 30 points wins.

Divide into two teams, choose "punny" team names, and write them on the scorepad.

The team with the shortest player goes first and chooses a player to be the first Pun-Giver. The first Pun-Giver selects a card, announces which letter the pun answers will start with, and begins reading the first pun. The other team starts the timer when the first word is read.

The Pun-Giver's teammates guess until somebody shouts the correct answer. There are no penalties for wrong guesses, so shout out everything that comes to mind!

The Pun-Giver continues to repeat the pun until it is guessed or passed. If a team is stumped, they may move on to the next pun by saying "pass".

If a team passes on a pun, the Pun-Giver quickly moves on to the next pun on the card. The team doesn't get another chance to answer puns that were passed.

When time is up, the Pun-Giver must read each unanswered pun (only the puns that were passed or read and not answered) one time to the opposing team, who may steal points by guessing the correct pun answers.

A pun answer doesn't have to be exact if it's deemed "close enough" by the group.

At the end of each round, total up the number of puns that were answered correctly or stolen and mark each team's score on the scorepad (see scoring).

The next round starts with the other team selecting a Pun-Giver.


The opposing team should pay attention to which puns were passed, watch the timer, and make a loud noise when time is up. You may also use a 1-minute timer on a smartphone to help keep time.

Teams score one point for each pun they answer correctly or steal. The last pun on each card is the most difficult and is worth two points.

The first team to score 30 points wins the game!

Some of the puns require more thinking than others. Play as teams with a "no-pass" rule. The game plays the same except teams can't move on to the next pun until a pun has been answered correctly. 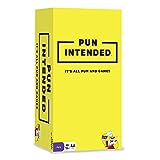