Win bets by proving you are up to the tasks you say you are, or by making wise side bets on others, and be the first player to collect five Cards!

Set out the Hoop, Cup and Ball!

The player who suggested playing this awesome game will be the first Challenger!

Now spin the Finger Spinner to see who you will be paired with (the Rival)! The closest player to where the pointer stops is it!

The Challenger (player who spun) takes a Task Card and reads it aloud. There are four types of Cards:

The Challenger makes a bet about how well they can perform the task, the Rival counters that bet, the Challenger can counter, etc., until one of you calls the other on their bet by saying "Prove It!"

Now you will have to name 11 ice cream flavors CORRECTLY in 30 seconds in order to score.

There is no limit to how many counter bets there can be; just remember to be realistic because you can be called on your bet and have to complete the task... and it's often Easier Said Than Done!

If the player attempting the task succeeds, they keep the Card. If they DO NOT complete the task, the other player keeps the Card.

Now the person to the left of the Challenger is the NEW Challenger, and spins the Finger Spinner to see who will be the new Rival for the next task, draws another Card, and so on!

If the Card drawn is a Buddy System Card, the two players will collaborate instead of betting against one another! The other players will officiate, and if the two players are successful, each receives a point (one keeps the Task Card, and the other takes a Proof Card).

Sometimes there will be TWO teams:

These are the extra scoring Cards in Buddy System Tasks, or to be used as "props" in some tasks.

In this type of task, the first player has the option of accepting the task or forcing the second player to take on the task. If the player is successful, they keep the Card as a point. If unsuccessful, the other player gets the point!

In this type of task, EVERYONE must play! The winner gets the point!

Some tasks may call for additional "props"-a spoon, coin, etc. If you'd rather not use your own props, simply skip those Cards!

If you have Cards, you may make a side bet when two other players are paired for a task (the Challenger and Rival CANNOT side bet).

Using the previous example, if you are player three in the scenario, you may bet one Card with player four (or five, etc.-or against the "house" if there are only three players) whether player one will complete the task or not.

Winner collects a Card from the other side-better(s). Make your bets quickly so the player doesn't have extra time to prepare for their task!

Not sure if someone answered correctly? The group decides if an answer is correct or not, and of course you can always look things up online!

The first player to collect five Cards wins the game! 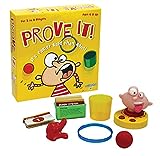