In Ponzi Scheme, players are financial frauds who are attempting to raise funds by claiming to invest in various bogus industries. Upon due day, players must pay the promised dividends to their investors.

In addition, players may trade stakes in these bogus industries with each other through Clandestine Trading . Whenever a player fails to pay the interest due, the game ends immediately. All "surviving" players score points according to the scale of their virtual industries.

The players do not have any money or industry cards at the beginning of the game. They have to obtain them from the market or through trade with other players.

The game will consist of several rounds. Each round proceeds in the following phases.

Beginning clockwise from the starting player, each player may choose to "Fund" from the market. Passing is allowed.

Whenever there are less than 9 funding cards in the market, immediately draw new fund cards to restock the funding board back to 9 cards.

Order within the same row does not matter.

Whenever the deck is empty, shuffle the discard pile to form a new deck.

Grace has 2 transportation & 1 real estate industry tiles in front of her. When it's her turn to choose a fund, she decides to take a transport tile. Since this is her third tile of this industry, she must take a fund card from the third funding row, and she receives money equal to the value of the fund card from the bank.

On the next turn Grace already has 3 transportation tiles, so she cannot take another transportation tile. She decides to choose a second real estate tile, thus she takes a fund card and receive money from the second funding row.

Beginning clockwise from the start player, each player may choose to offer a clandestine trade to another player. Passing is allowed.

Secretly place any amount of money inside the trading envelope, and hand it over to the player you are trading with. The other player inspects the money within and declares a response from the following 2 options:

When you choose a player to offer a clandestine trade, the other player cannot refuse. But that player will get to decide whether to "Sell" or "Buy" a tile of the chosen industry, and you cannot refuse!

During the game, the cash you have and the price of clandestine trade are all private information. You should keep all your money hidden behind your player screen at all times.

The price of an clandestine trade should be kept strictly inside the envelope, only the participating players should know the exact amount. They should not disclose the exact price, but the other players are free to discuss and speculate on the transaction.

All other information, such as the type of your industries, fund cards, interest and payment period are all public.

If you have the start player marker, pass it to the player on your left. The player who receives the marker will choose and remove a fund card from the market. Place all removed cards face up next to the board to form a Discard Pile.

If a starting fund card is removed, put it back into the box instead. It is removed from the game.

Order within the same row does not matter. Whenever the deck is empty, shuffle the discard pile to form a new deck.

If the amount of "Bear" fund cards in the market is equal or greater than the number of players, then the market crashes:

All players rotate the time wheel one space clockwise. Do not move the fund cards. If the market crashed this turn, rotate two spaces instead.

If any fund card goes over the arrow and lands on "5", move these cards to the arrow. Do not move the time marker. Only turn the wheel.

The market crashed this turn, so we have to turn the wheel 2 spaces this turn.

All players check if any fund cards are next to the arrow of the time wheel. All players pay the interest listed on these cards to the bank. If anyone fails to pay all interests due for this turn, they are bankrupt and the game ends immediately. If all players have paid off their interests, the game continues.

All players check the payment period of the fund cards they paid off. Put these fund cards next to the corresponding number of their time wheel. They will never be removed from your wheel.

In other words, every fund card you have will simply return to haunt you again in a fixed amount of turns, but you will only take money from the bank once!

4. A new turn begins, starting with the person with the start player marker.

Whenever one or more players fail to pay all their due interest and goes bankrupt, the game ends immediately. All bankrupt players lose immediately. The remaining players tally their scores to determine the winner.

Industry Points: Players score points according to the size of each industry they have.

Wealth Points: Players score points according to the money they hold.

The player with the highest total points wins.

In case of a tie, the player with the most valuable fund card on their time wheel wins.

At the end of the game, Grace has successfully paid off her all her due interest this turn and is not bankrupt, so she gets to tally her points.

Alice also ends up with 14 points. Since the largest fund card on Grace's wheel is "62", which is larger than Alice's "45", Grace wins the game.

We recommend all players to have played the game at least once before playing the advanced rules. The advanced rules are the same as the basic rules, with only the following changes.

When scoring, players will not score wealth points. You can only score according to your industries and the Luxury Tiles you bought. 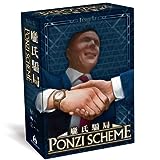