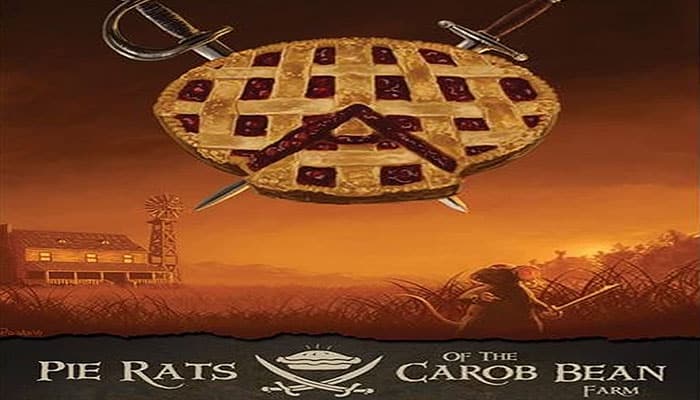 In Pie Rats of the Carob Bean Farm each player takes on the role of a Captain of the Rats and tries to build a crew of not-so-loyal rats to loot the farmer's wife of as many of her pies as you can.

The heavier the pie the more rats it takes to steal it, the more points it is worth. The Captain with the most points at the end of the game is the winner.

If you can't decide who should go first then it is the person that most recently ate pie. If it is a tie then it's who ate the most pie.

If it's still a tie then it's the person that helped the most to clean up the table. The player should take the Lead Player card and place it in front of them on the table.

Do not hide tabled cards (cards in play) at any time during the game. If another player asks to see your tabled cards you must show them.

Each round is divided into 6 phases. The player with the Lead Player card goes first in phases 2-6. Play follows in a clockwise direction from the Lead Player.

Reveal a Pie card. Draw a card from the Pie deck and place it face up on the table.

This is the card all the Captains are trying to loot. It is possible that Pies from previous turns are still "on the window sill" so that there are multiple Pies for the Captains to loot.

Place your Charisma cards next to your Captain. If you have a Charisma card in your hand and you do not play it during this phase then you will not get a chance to play it to the table until the next turn.

Note: Players may save their cards for the next turn. They do not have to table playable cards. If for some reason you would like to save cards in your hand rather than have your opponents know what you have, you are very welcome to do so.

Just remember, if you keep cards in your hand now, you will draw fewer cards later. In phase 6 you can draw up to a hand of 3 cards. If you have held 1 card back during a phase then you will only get to draw 2 cards later.

You may now place Crew cards under your Captain. Again, you don't have to place all your crew on the table but any Crew left in your hand can not be used to loot a pie.

In this phase you simply make a choice. You may choose to protect one of your CM by turning it sideways or declare that you are going to lure away a CM from another Captain.

You cannot protect a CM and lure away a CM on the same turn. It's simply one or the other. (Unless you have a special card that says differently). In this phase no cards are placed on the table and no Rats are lured away from other Captain's Crew.

If you protect a CM another player cannot lure it away from you. You may want to consider using this option if your CM has a high strength and a low loyalty. If you choose to protect a CM your cards would look something like the illustration below:

In turning their CM sideways the Captain has protected it from being lured away to another Captain's crew. But they will not be able to lure a CM to their crew from another Captain in phase 5 because they can only perform one of the two options.

In this phase, Captains that did not choose to protect a CM in phase 4 attempt to lure CM away from another Captains' Crew. In order to do this there are two numbers you need to know.

In the example shown at the top of the next page the Captain would have a total of 4 charisma points to use towards luring a CM away from another Captain's crew. (3 points for the Captain card +1 for the Hooked Hand).

The second number you are going to need to know is the Loyalty value of the rat you are luring. Calculate the loyalty by adding the Captains Charisma to the Loyalty of the CM (bottom left on the Crew card).

To lure a CM away from another Captain you need at least 1 more charisma point than the total loyalty of the CM you are trying to lure. A Captain can only lure away 1 CM from 1 other Captain per turn.

The only exception to this is if you have cards, such as the Charm card, that specifically states you can lure away additional CM. Discard any Charisma cards used after luring a CM from another captain.

Note: Charisma points can only be used offensively to lure CM to your Crew. They cannot be used defensively to stop someone from luring a CM away from you.

Using the Illustrations on page 10, let's say that Captain Red Hook, with his Hooked Hand, wants to lure a CM away from Captain Petronella.

Any CM that have been lured away are turned sideways to note that they can not be "re-lured" away during this phase.

Now it's time to loot the Pies! All you need to loot a Pie is a total strength (Captain + CM) equal to or greater than the weight of the pie. All CM involved in looting the Pie are placed in the discard pile as they have gone away to eat their share of the Pie.

If you had any extra CM they'll stick around and help the Captain loot the next Pie. A Captain can only loot 1 Pie per turn.

Because there are some cards that can mess up a players ability to loot a pie at the last minute here are some options of how to handle the Phase 6 situation...

The primary rule for the looting of Pies is this... Once the turn to loot a Pie gets to a Captain that Captain can quickly yell, "I'm looting a Pie!" At that point he and his crew is frozen and protected from any harm or other cards. (Even cards that say "may be played at any time").

The Captain can now calmly figure out which CM he wants to use to help him loot which Pie away. If, however, the Captain is not able to loot a Pie he must discard his strongest CM.

If cards are tied for strength then it must be the strongest strength with the highest loyalty. Remember, the Captain does not have to yell, "I'm looting a Pie!" but it does protect him from cards like the Carob Bean and Kidnapping. You cannot yell "I'm looting a pie!" if it is not yet your turn.

The "nice" alternative option: You can just choose to be nice to each other and never play mean cards against opposing Captains during the Loot a Pie phase.

The "aggressive" alterative option: Anything goes... any Captain can play any card that can legally be played anytime it can be played. Think you're looting a Pie? I hope no one kidnaps your strongest CM or feeds a Carob Bean to a strong CM. Just a note, this version of Phase 6 makes the game last longer.

You need to decide how phase 6 will be played BEFORE the game starts.

If no option is chosen the default game play is option (a).

At this point, players may discard any unused cards from their hand if they want to. Any player that has less than 3 cards draw until they have 3 cards. Pass the Lead Player card to the left and start again with Phase 1.

If at any time the draw pile runs out of cards, shuffle the discard pile, turn it over and use it for the draw pile.

The rounds continue until the last pie is looted. The player with the most points wins the game. In the event of a tie:

If all 3 of the above criteria are met... it's a tie! If you're not happy with a tie then