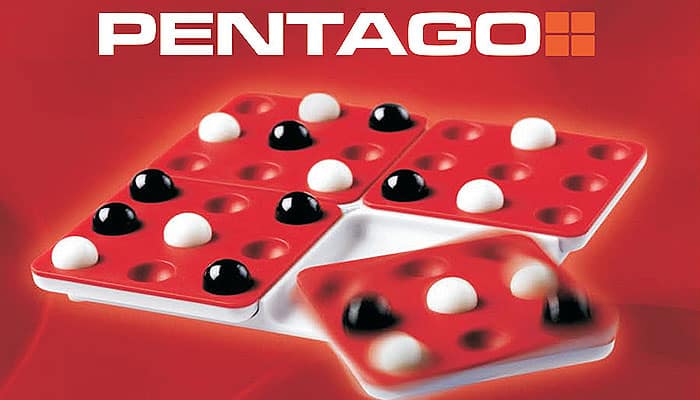 The game starts with an empty game board, consisting of the base and the four twistable game blocks. Decide marble color of each player.

To determine who goes first, disguise one of each color marble in your hands and have your opponent choose one hand. The chosen color goes first and places a marble anywhere on the game board.

The object is to get five marbles in a row before your opponent does. The mind twisting part of Pentago is that each player will also twist one of the four game blocks 90 degrees (one "notch"), clockwise or counter clockwise, as part of each turn.

A 180 degree (double "notch") twist is not allowed. The twist is the key to create winning positions in Pentago.

Players take turns at placing marbles on the game board and twisting the game blocks. A player is free to twist any of the game blocks, regardless of which game block the player placed the marble on.

In the beginning of the game, there will be neutral game blocks, allowing a player to ignore the twist portion of their turn. A neutral game block is one that is empty or has only one marble in the middle of it.

A winning row of five marbles can occur vertically, horizontally or diagonally, anywhere on the board and will span two or three game blocks.

What seems like a simple five-in-a-row game quickly gets mind twisting as the board fills up and both players are twisting the game blocKs, creating a constantly changing and challenging game scenario.

You'll want to really watch your opponents position as it relates to yours and play as much defensive as you do offense.

Here is an example of a game played between Red and Black (the colors of your marbles may be different). In this game, Red went first.

The game starts with an empty game board. This guides refers to positions on the game board as indicated oy the numbers. Example; Position 2/5 refers to game block 2, the middle position.

Both players have made three moves but neither has twisted a game block, since there hasn't been a need and one game block still remains neutral.

Red places a marble at 1/4 with no twist and goes on the offensive by getting three in a row on game block 1 and threatens to get five-in-a-row on the next turn. Now Black is in trouble.

Black counters with blocking Red by placing a marble at 2/4 and twisting game block 1 right.

Red continues the offensive by placing a marble at 315. Red does not twist because game block 3 is still neutral and does not benefit from twisting at this point.

Black counters Red again by blocking Red at 3/2 with a marble and twists game block 2 right.

Red now delivers the final blow by placing a marble at 2/8 and twisting that game block right for the win.

The final position of the Red vs. Black game.

As this game shows, don't let your opponent get three in a row on one game block, or you'll be on the defensive, sometimes with losing results.

On the other hand, sometimes playing defense for a few moves creates opportunities for you that your opponent may miss because he/she can get too busy trying to run the game.

At this point, play a few games to get a feel for Pentaao play and the various strategies and logic used to create good game technique.

The constantly changing game board will take a few games to get used to. Once you do, you'll love to explore all the perplexingly complex and deep logic that is required to conquer another seasoned player.

A tie can occur if both players have played all marbles and neither player has five-in-a-row. A tie can also occur if one player twists his/her marbles into a row of five, but also creates a row of five for the opponent.

However, should one a er be able to win by simply placing a marble on the board for a row of five, without twisting a game block, then that game is over, without that player having to twist a game block, even if doing so would have resulted in the opponent also getting five-in-a-row.

Twisting a neutral game block will have no effect on the positional nature of the game board so the twisting part of a move is optional while there are neutral game Blocks.

This does not mean that the player cannot twist a game block in the beginning of the game, it is simply optional until such time that all game blocks have at least one marble on it that isn't in the middle, then you have to twist a game block as part of your turn.

Playing a match is a common way to play Pentago. Match play consists of playing best out of five games, meaning the first player to win three games wins the match.