Obscurio is a cooperative, asymmetric game, where each player has a secret role. Players try to interpret pictures to escape the Library. Depending on their role, they will each play differently.

Note: Use the following rules for games with 4 players or more. If you play with 2 or 3 players.

All other players choose their Character card and take the matching chip. Each player keeps their card in front of them and places their chip at the center of the board 6. These players are the Wizards.

Take the Traitor card. Add Loyal cards until you have as many Loyalty cards as there are Wizards (for instance, with 4 Wizards, take 1 Traitor cards and 3 Loyal cards).

Shuffle the cards and deal 1 card to each Wizard. Each Wizard secretly looks at their Loyalty card and keeps it hidden from any other player. One of them will be the Traitor.

Place the Trap tokens in the bag 7.

Choose a game difficulty. Use the Beginner Grimoire level for your first game. Take the number of Cohesion tokens indicated in the table for your number of players (including the Grimoire) and the difficulty level that you chose.

Tokens in the dark area: 4 or 5 players: 5 / 6 to 8 players: 7 All other game elements remain in the box for the moment. You are now ready to play Obscurio!

Important Note: the Grimoire is not allowed to speak with the Wizards. That player cannot gesture, mimic, nor make any sound or comment to try to give hints.

To communicate with the Wizards, the Grimoire can only use the Butterfly markers.

A game of Obscurio plays in several turns. Each turn is divided into 5 steps. On each turn, the Wizards must resolve a riddle (interpret the clues given by the Grimoire) to find the door that will lead them to the next Room. To exit the Library, they must successfully cross 6 Rooms.

Each Room features many obstacles designed to prevent the Wizards from escaping the Library. During the turn setup, you must draw one or several Trap tokens from the bag and place them in front of the Grimoire.

Example: During the previous turn, the Wizards finished their actions after the timer reached the '+2' space. As a result, they must draw 3 Trap tokens on that turn (1 token +2 extra).

The Grimoire takes the first Illusion card from the deck and looks at that card (make sure that no other player can see it). That card is the Exit card: the Wizards must identify it (among many others) to move to the next Room.

The Grimoire keeps the card face down. As long as Step 2 is not over, the Grimoire may look at the Exit card.

Then, the Grimoire draws 2 other Illusion cards and place them face up on the Desk. These are the Pages of the Grimoire. Using the Butterfly markers, the Grimoire points to 1 or 2 elements on these Pages.

These elements must be related to the Exit card, as the Wizards will use them as clues to identify that Exit card. The Grimoire may use one of their two Butterfly markers, or both of them. They can be placed on each Page, or both on the same Page. The Butterfly must be placed inside the circle of the card they point at.

The Grimoire may also place one Butterfly marker at the bottom of a Page. This means that the Page as a whole is a clue, and related to the Exit card, because of its subject, its theme, its colors, etc.

Note: Once placed, a Butterfly marker may no longer be moved by anyone (neither by the Grimoire, nor by any other player).

Furthermore, the Grimoire may not use both Butterfly markers to point to the same element.

Once the Grimoire has placed their Butterfly marker(s), they place the Exit card face down next to them and pass the Desk to the Wizards. The Wizards may now freely talk about the Butterfly markers and try to interpret their placement.

Note: The Grimoire ensures that this step plays smoothly, but they cannot comment on Traitor's choices, as they must not disclose the Traitor's identity. Don't talk to the Traitor, and make sure that they remain anonymous!

This step plays in 3 phases:

Important Note: During this step, it is critical that the Grimoire and the Traitor do not disclose any information about the Traitor's identity.

The Grimoire should not call the Traitor by their name, nor should they turn to them when speaking.

The Traitor should move with care; making any sound would draw the other players' attention to them.

The Grimoire now takes the Exit card, plus any cards chosen by the Traitor during the previous step, and adds as many cards as needed from the deck to have a total of 6 Illusion cards (Trap tokens may alter this total). Then, the Grimoire shuffles the cards and give them to the Wizards.

The Wizards place them face up on the appropriate spots of the board, numbered #1 to #6. These spots are called "Doors".

During this step, the Wizards must find the Exit card, hidden among the other Illusion cards. They must discuss the clues given by the Grimoire (the Butterfly markers) and try to understand how the elements indicated by the Butterflies are related to the Exit card.

As soon as the first card is placed on the board, the Grimoire turns the hourglass and places it on the first space of the Time Track (on the back of the card holder).

If the hourglass runs out before the end of that step, the Grimoire must turn it again and place it on the second space, and so on. The sooner that the Wizards agree on a card, the fewer Traps they will suffer on the next turn.

When a Wizard thinks they have found the proper Exit card (i.e. a card that would match the clues that they received), they place their Character chip in front of the matching door. Wizards can change their mind and move their chip as long as the step is not over.

The Wizards may cooperate and each may choose a different door to increase the group's chances to find the right door. However, doing so is risky, as the group will lose one Cohesion token for each Wizard that chose the wrong door.

This step can end in two ways:

Example: In this example, Blue thinks that the clues given by the Grimoire are a reference to the window and the dark blue displayed on card #1.

Also, they want to make sure that someone chooses this door. Red and Yellow are both convinced that the correct door is door #6 because of the moon and the stars.

When this step ends, the Grimoire reveals the correct Exit card among the doors. Then, proceed as follows to resolve that step:


Example: In this example, the Exit card is Door #3. At least one Character chip is in front of that door. As a result, the Progress Marker moves one space forward.

Then, each player that was in front of a wrong door takes one Cohesion token from the matching area and places that token on their Character card. Blue, Red and Yellow take one token each.

The team lost 3 Cohesion tokens - but at least they moved to the next Room.

All used Illusion cards are discarded face up next to the board. All Trap tokens are placed back in the bag. All Wizards place their chip at the center of the board. Then, proceed to the next turn, starting with Step 1: Turn Setup.

As soon as they take the last Cohesion token from the first area of the gauge in Step 4, the Wizards start looking for the Traitor in their ranks: the Accusation Phase begins. The Grimoire does not take part in this phase. The Accusation Phase plays as follows:

Turn the hourglass. The Wizards have 1 minute to discuss and try to find who is the Traitor among them.

When the hourglass runs out, on the count of three, the Wizards simultaneously point their fingers at any player of their choice, if they think that player is the Traitor.

Count the votes against each player. The player with the most votes is accused (if there is a tie, all tied players are accused). Any accused player reveals their Loyalty card. For each Loyal player falsely accused, lose 2 Cohesion tokens (place them back in the box).

If the Traitor was not accused, and if there are still Cohesion tokens remaining, start this phase over (Turn the hourglass, etc)..

If the Traitor was accused and exposed, and if there are still Cohesion tokens, proceed to the next turn. The Traitor removes their chip from the board.

From now on and until the end of the game, the Traitor will only take part in Phase 3 (Traitor cards). They may no longer participate in the discussions between Wizards.

Note: Loyal players still take part in all phases of the game turn, even if they were falsely accused.

The game may end in two ways:

The game instructs you to move the Progress marker while that marker already is on the last space of the track (the track features 6 spaces) and the Wizards still have at least 1 Cohesion token: the Wizards managed to escape the Library!

The Wizards and the Grimoire win the game. The Traitor loses!

The last Cohesion token is taken from the dark area of the gauge: the Wizards are lost in the Library and the group scatters.

The Traitor wins the game alone!

There is no Traitor in 2- or 3-player games. Ignore any rules or steps related to the Traitor. Also:

In a 2-player game, there is one Grimoire and one Wizard player. The Wizard starts with two Character chips: their own chip, plus another one who will be their companion.

Place the 2 chips at the center of the board. On Step 4 (Choosing a Door), they must use the two chips. Both chips may be placed in front of the same door, or in front of two different doors. 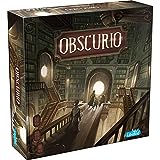