888 - London - Whitechapel. The night covers the gloomy alleys with a veil of darkness. Jack is moving in the shadows... The finest investigators of the gaslight age have gathered here to catch him before he uses the darkness to slip away for good.

The trap is slowly closing upon him... But Jack is cunning. He is in fact impersonating one of the investigators... Will the others unmask him?

Darkness and light: the board represents the Whitechapel district, with its shadowy alleys. Some of the gaslights are lit and all the adjoining hexes are considered as illuminated, all the other hexes are in darkness.

One of the players plays Mr Jack. He will be called Jack in these rules. He is the only one who knows which identity he has borrowed. His goal is to escape the investigator before dawn (at the end of the eighth turn) or to leave the district by taking advantage of the darkness.

The other player plays the police detective. He will be called «the detective» in these rules. His goal is to uncover which investigator Jack is impersonating and to catch him before dawn.

At each turn, four characters are used (two by the detective and two by Jack). Then there is a call for witnesses. Jack must now announce whether the character which he is impersonating is visible or not.

Seen characters: the characters that are on an illuminated street hex (hex adjoining a lit gaslight) are seen, since they can be seen by anyone in the district, any passer-by. The same rule applies if two characters are on adjoining hexes, even in the darkness.

Those two characters are considered as seen since they are close enough to see each other in spite of the shadows.

Unseen characters: the characters that are not on an illuminated hex (lit by gaslight or Watson's lantern) or on a street hex adjacent to another character are considered to be unseen.

Thus, at the end of each turn, depending on the answer given by Jack (seen or not seen), the detective can totally clear some of the characters and narrow down the search for the guilty party..

The game is thus a fierce struggle between Jack and the detective to cleverly move the different characters so that they can be seen or remain hidden.

The Detective tries to eliminate the suspects bit by bit whilst taking care not to facilitate Jack's escape, and the latter does everything in his power to muddy the waters and disappear for good!

The players choose who is to play Jack and who plays the detective. The detective faces the board in the upright position: the yellow edge is in front of him.

Jack is on the other side of the board, and sees it as upside down. The color of the edge in front of him is grey.

The character tokens, the covered manhole tiles, the lit gaslight tiles are set on the board as shown in picture 1.

Note that as the game starts, four characters are in shadow and the four others are in the light - all the character tokens are set with the suspect side up.

The Witness card is placed next to the board with the side showing Jack seen face up for the first round 4. Put the turn counter token on the «Turn 1» square 5 (It is the first step on the turn track, closest to the detective).

The player playing Jack draws one alibi card, secretly reads it and places it face down in front of him 6. This is the character that Jack will be impersonating during all this play. (This character is the only one that has no alibi).

Note: after everything has been set up at the beginning of the game, four characters can be seen and four can't.

Each game unfolds over several turns, eight at most. Each turn unfolds as follows:


I. Choosing and using the characters

During each turn, four characters are played, two by each player.

Draw the first four character cards from the pile and place them face up.

Jack then chooses two characters from the three remaining ones. He plays them in the same way, and then places the cards face down.

And finally, the detective plays the last face-up character.

Jack now chooses a character and plays it, the detective then plays two characters, and finally Jack plays the last one.

The symbols on the turn track show the order in which the players choose their characters. The color of the cards is the same as that of the board edge in front of each player (yellow for the detective, and grey for Jack).

The four characters have been played and Jack must now announce whether he can be seen or not.

Jack can be seen if the character he is impersonating is on a lighted hex or next to another character.

Jack places the Witness card next to the board with its Seen side up as shown.

In this case, those characters who cannot be seen are innocent.

The Detective flips them over to their "Innocent" side, without changing their location. The Witness card remains as it is until the next call for witnesses.

Jack cannot be seen if the character he is impersonating is not on a lighted hex or next to another character.

Jack places the Witness card next to the board with its Not Seen side up as shown.

In this case, those characters who can be seen are innocent. The Detective flips them over to their Innocent side, without changing their location. The Witness card remains as it is until the next call for witnesses.

Note: if Jack cannot be seen at the end of a turn, and only on that condition, he is allowed to try and leave the district during the following turn. If he succeeds in doing so, he wins the game!

III. Shutting a gaslight off


IV. End of the turn

When all the steps described above have been completed, the next turn can begin.

Move the turn counter token one step toward the upper side of the board.

Note: at the end of each even-numbered turn (and only then), the character cards are reshuffled.

There are THREE possible ways to end a game:

Use Of Tokens Or Special Hexes

The light grey hexes and those with a manhole are street hexes.

The others are buildings: they cannot be crossed except by Miss Stealthy.

The covered manhole tiles prevent entry to or exit from the sewers at their location. 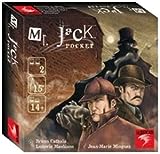