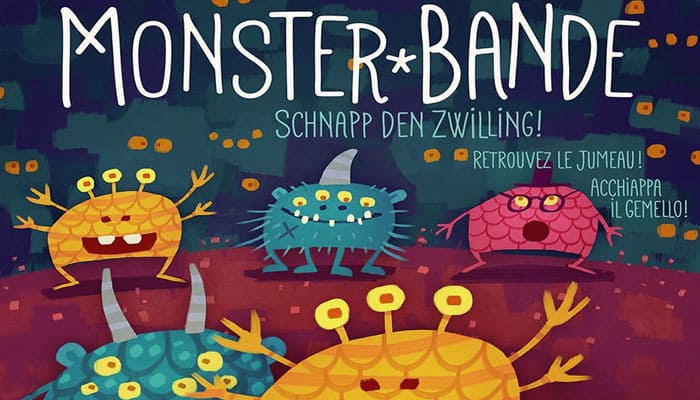 What is it all about:

The game works best if played in teams. It is up to the players if two or more teams are built.

All cards with red back sides are well shuffled and put on a face down pile.

The cards with the blue back sides (twins) are spread out on the table with the monster sides up. The hourglass which determines the duration and number of rounds and the two dice are put next to the cards.

Now it is time for the teambuilding.

The team with the most eloquent player starts with him throwing the dice.

The dice determine which monster features must not be mentioned by him in this round. The dice remain visible for everyone on the table so the opponent team can control if any "forbidden characteristics" are mentioned.

The hourglass which runs for 60 seconds is turned around. Now the members of the explaining player's team try to find as many twins as possible within the remaining time.

The starting player draws the upper card from the red pile and tries to explain the visible features of this monster as fast as possible. Any number of hints, facial expressions and gestures are allowed - only the forbidden characteristics must not be said or described...

While the player is describing the rest of his team looks for this twin among the spread out face up cards on the table.

While doing so the team members may ask question to the describing player - when answering he must not mention any of the "forbidden characteristics".

The team members may discuss with each other. Then one monster must be chosen by touching the card.

When the hourglass expires the next team is up to describe and guess. This continues rotationally until all twins are matched.

The dice show the symbols "Number" + "Horns and ears"

The player explains: "My monster is blue, has hair, legs, teeth and the mouth is closed". The team searches for this features and hopefully finds the right monster.

The player explains: "My monster is blue, has hair, legs, teeth and two ears..". In this case the opponent team has to intervene immediately and shout "Stop" as it is not allowed in this round to mention or describe a "Number" as well as "Horns and ears".

Now the next monster is drawn from the red, face down pile - continue with the next card!

As soon as all twins have been found the teams com- pare the cards they won by putting them side to side in a pile.

The team with the highest pile wins the game.

If two or more teams are equal they share their victory!