A Medieval game of trade and commerce, Die Händler is set in Europe, where trade wagons carry wares between six cities on the board. Essentially, players buy goods, load them onto wagons and send them for maximum profit in other cities.

The whole game looks very inviting. The medieval cities depicted on the board, together with the player crests, cardboard coins, money pouches, sticker decorated wagons and wooden commodity pieces, immediately creates the right atmosphere for the players.

There are six cities - Paris, Cologne, Brugge, Gent, Vienna and Genoa - which are interconnected by roads. Three wagons carry goods from one city to another.

No-one owns the wagons or controls any of them single-handedly, and in principle a player can put commodities on any transport. There are six different commodities - salt, iron, wine, silk, cloth and food - all of limited supply.

The goal of the game is to make money by delivering goods to the towns, and use the money to buy increases in status. The game ends after a certain number of deliveries have been made and the winner is the player with the highest level of status. 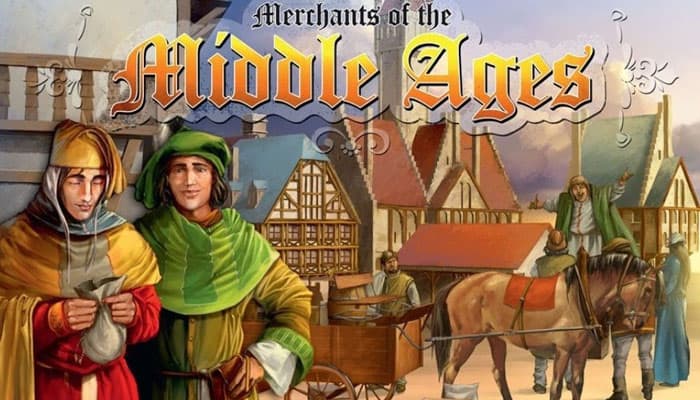 Europe during the Middle Ages. You are a merchant, owner of important markets in 6 majestic cities of Europe. At the heart of this commercial trade are 6 different kinds of goods: cloth, iron, wine, food, silk and salt. â€¦

Every time the wagon and the courier meet on a space, the active player can take one Influence card from the pile. Each card can only be used once and is removed from the game after it is played. The cards are:

You can load 2 goods for free on any wagon. You may not load the same kind of good that the Loading Master loaded. This card is played during Action 2.

Note: The Loading Master cannot prevent you from loading your goods for free. If he did not put any good on the wagon, you may load the goods of your choice. This card replaces your loading action; i.e. you cannot load more than 2 goods with the help of this card. â€¦

Merchants Of The Middle Ages