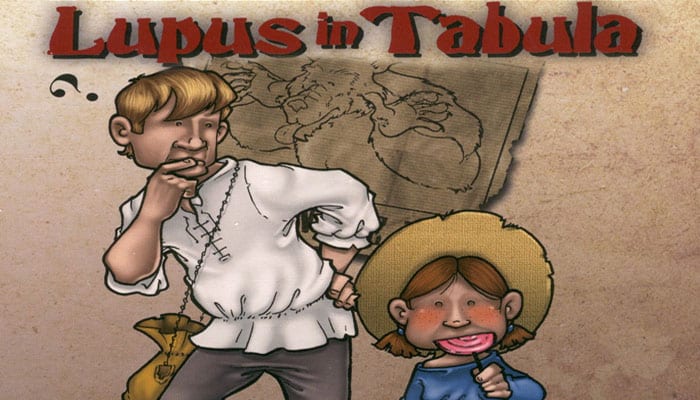 Werewolves haunt the secluded village known as Tabula: every night some villagers turn into werewolves and slaughter an innocent victim to satisfy their hunger.

Surviving villagers gather every day to discuss the problem: at the end of the discussion, they lynch one person among them, thinking he could be a werewolf. Can you survive the massacre?

Choose a Moderator: he does not belong to either side and only manages the flow of the game; the other players will play their role according to the cards.

Sort the cards: ghosts, evidence, and characters. Build a deck of characters depending on the number of players:

The Moderator randomly deals one card face down to each player, glancing at it and memorizing which players are the Werewolves.

Each player secretly looks at the card he is dealt and must keep it face down until the end of the game!

Each player receives a voting token. The Moderator takes the Summary card and keeps the Ghosts, the two evidence cards and the "Welcome!" handy.

Each turn of the game is divided in two cyclic steps: night and day. At night the Werewolves kill one player. During daytime, all the living players gather in the village to lynch somebody, believing he is a Werewolf.

One of the Humans, the Seer, secretly has the Second Sight and can detect the taint of lycanthropy at night.

The Moderator calls the beginning of the night (e.g. "it's nighttime; everybody close your eyes!"). All players close their eyes. To cover up accidental sounds, all players start tapping the table with one hand.

The Moderator calls the Seer aloud ("Seer, open your eyes; Seer, pick someone to ask about").

The Seer opens his eyes and silently points or nods at another player. The Moderator silently answers thumbs-up if the Seer pointed at a Werewolf, thumbs-down otherwise. The Moderator then calls the end of the Seer's phase ("Seer, close your eyes"). The Seer closes his eyes.

Note: this phase must be played even if the Seer has already been eliminated from play so no clues are given out; the Moderator will call the Seer, and the end of his phase a few moments later, without having the Seer actually playing the phase.

The Moderator now calls the Werewolves ("Werewolves, open your eyes and pick a human to kill").

The Moderator now announces the daytime ("Everybody open your eyes; it's daytime"). All players open their eyes. The Moderator tells the player chosen by Werewolves that he has been killed!

That player no longer plays as a character, but as a Ghost instead. He may not talk for the rest of the game. Also, he may not reveal his character card! He receives a Ghost card and the "Welcome!".

The survivors must now choose someone to lynch. Players can talk with each other to try to identify the Werewolves: there is no restriction on speech (truth, misdirection, lies..)..

However, the Werewolves are disguised among the Humans and will probably throw suspicion on the Villagers, mostly on the one they think is the Seer. As already stated, players may not reveal their card to other players!

After three minutes of discussions, the Moderator asks each player, starting with the one sitting to the right of the player with the "Welcome!", and proceeding clockwise, who should be lynched.

All players (including Ghosts) take their voting tokens and on their turn they vote by placing the token in front of the player they wish to lynch (at this stage, the side of the token has no importance).

Each player collects his voting token. The Moderator places one Werewolf evidence card in front of each suspected villager: one receives the paw print and the other one the tuft of fur.

Example: During the first day, there are 8 players still alive and 1 Ghost (9 votes total). Frank is the ghost, and he has the "Welcome!".

The voting round has just ended: Andrew got 3 votes, Danielle and Rebecca 2 each, Bea and Carl 1 each.

Andrew is suspected. Danielle is closer to Frank, clockwise, than Rebecca. Hence, the tie is broken with Danielle being suspected. Andrew and Danielle each get one Werewolf evidence card.

The two suspects may try to defend themselves with one more brief speech. Once the speeches are over, unsuspected players who are still alive (i.e. not suspected players, nor Ghosts) vote again for which suspect will be lynched. This voting takes place secretly, and at the same time.

Players lay their voting token on the table with the side corresponding to the player they want to lynch face up, then cover it with one hand. When all players are done, votes are revealed at the same time, at the Moderator's command.

The player with the most votes is lynched and becomes a Ghost! In case of ties, the lynched player is the one closest to the one with the "Welcome!", counting clockwise. The Moderator collects the Werewolf evidence, and gives the lynched

player a Ghost card. The lynched player may not comment on the decision, and may not talk for the rest of the game (obviously, he may not reveal his card!). The day is now over: the game continues with another night and so forth, until one side wins.

Example: Andrew and Danielle, suspected of being Werewolves, defend themselves with a speech trying to prove they are not: will they be convincing?

All players still alive (excluding Ghosts, Andrew, and Danielle) secretly choose whom to lynch. The Moderator announces "At my command, reveal your votes: 1, 2, 3, now!"

Votes are revealed. Two votes show the tuft of fur and are for Andrew, while four show the paw print and are for Danielle. Poor Danielle! Angry Villagers lynched her believing she is a Werewolf: are they right?

With 9 or more players, you can add one or more of the following characters to the playin deck. The number in brackets it's the suggested minimum number of players for introducing that character.

The Moderator calls the end of the game with a victory for the Humans if they lynch all the Werewolves.

The Werewolves win if they slaughter (or cause to be lynched..). enough Humans so that the numbers are even (e.g. 2 Werewolves and 2 Humans, or 1 and 1): then the Werewolves mercilessly slaughter the last surviving Villagers openly!

A side always wins as a whole: therefore previously eliminated players win too!