In JAWS, one player takes on the role of the killer shark off Amity Island, while the other 1-3 players take on the roles of Brody, Hooper and Quint to hunt the shark. Character and event cards define player abilities and create game actions for humans and the shark.

Gameplay is divided into two acts - Amity Island and The Orca - played on a double-sided board to replicate the film's story:

In the Amity Island phase, the shark menaces swimmers and avoids capture. Other players attempt to pinpoint the shark's location and save swimmers from shark attacks.

In the Orca phase, played on the reverse side of the game board, Brody, Hooper and Quint are aboard the sinking ship engaging in a climactic battle against the shark, while using additional action and strategy cards to defend the Orca from targeted shark attacks.

If humans kill the shark, they win; if the shark attack on the Orca succeeds, the great white shark wins. One player takes on the role of the Shark. The other players take on the roles of Quint, Chief Brody, and Hooper, who work together as a Crew to eliminate the Shark.

A full game is played over two Acts, in which success in Act 1 provides advantages going into Act 2. However, either Act may be played separately for a shorter game.

Each round, the Shark secretly moves through the water surrounding the island, eating swimmers while trying to avoid detection. Meanwhile, the Crew rescues swimmers and tries to locate the Shark. â€¦

Q: If Quint launches a Barrel into the Shark's space during a round in which the Shark played their Out of Sight Power Token, does the Shark still get hit with the Barrel?

A: Yes. Out of Sight only helps you avoid being detected by the Fish Finder and the Binoculars. â€¦ 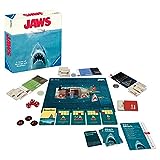