In each round one of the players takes the role of the Hall Monitor (the Catcher) - his aim is to catch the other penguins (the Runners), who will try to collect fish hanging from the doors.

Players gain victory points for catching others or for collecting fish. When either the Catcher has caught all the Runners or any of the Runners has collected their 3 color fish, the round is over.

The game is over when every player has been the Catcher once. The player with the most victory points is declared the winner!

1 Arrange the 5 boxes by matching the same color dots on the bottom of the doorframes.

2 Put the 4 white fish tokens on the 4 marked spaces to hold the board.

3 Choose a color and take the penguin, reminder card, ID card, and 3 fish tokens of that color. Put your color reminder card and ID card on the table in front of you. Unused components are put aside.

4 Shuffle all the fish cards and put them in a face down draw pile within easy reach.

5 The player who saw a penguin most recently becomes the Catcher for the first round.

Before your first Game

Take your penguin and start on the red circle in the Classroom (box nr. 1).

Flick your penguin around the school until it's back in the Classroom again. Once you're done, let the next player get in some practice.

If you want the penguin to run around corners or make crazy turns, flick it on the same side you want it to turn. So if you flick its right side it will rotate to the right.

Believe it or not, but the penguin can also jump! Flick the penguin on the very top of its head, it will make the penguin jump. Use this to jump over walls! It's a legal move and all the cool kids are doing it!

The game consists of as many rounds as there are players (except in a 2 player game). In each round one player is the Catcher and the other players are the Runners. Each round consists of 3 phases:

1. Each Runner attaches one of their fish tokens on each of the three doors marked with the fish symbol.

2. The Catcher places his penguin in the Kitchen (box nr. 2) anywhere within the red lined area. The placement of Runners is described below.

Phase 2 - Playing The Round

It's go time! The round is played in clockwise order starting from the player on the left of the Catcher. So in a 4 player game the sequence goes Runner - Runner - Runner - Catcher, and then repeats until the round ends.

A player's turn consists of one flick. The player on the left of the Catcher starts the round by putting his penguin on the red circle in the Classroom (box nr. ) and flicking it. Then the next player in clockwise order does the same.

The Catcher starts from the spot in the Kitchen where he placed his penguin during the Round Setup. In each next turn the player flicks the penguin from the place, where it stands at the beginning of his turn.


Events that can happen in a player's turn:

ID taken: If a Runner's ID card has been taken, don't worry! He is not out of the round and can still continue to play and collect fish!

If you have two fish cards with value 1, you may turn them face up at the end of your turn and immediately take another turn and flick your penguin following the regular rules. You do not lose these cards and still get points for them at the end of the game!

These cards must remain face up so you don't use them again for an extra flick. If you have enough cards, you may take more than one extra turn in a row. This ability may be used by both the Catcher and the Runner.

Phase 3 - The End Of The Round

Now that the round has ended:

The game ends after as many rounds as the number of players (each player will be the Catcher once). Count the victory points from your fish cards and the player with the highest total of victory points becomes the winner! Don't forget to also count your revealed ones!

In case of a tie, the tied player with the most cards becomes the winner.

If this is also a tie, the tied players share the victory.

In the rare case you don't want to play another game of "Ice Cool", pack the boxes in the order shown below.

There are just a few changes in the rules for 2 players:

All other rules remain unchanged. Have fun! 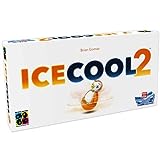