Squeeze sides and gently pull the hippos out from the tabs.

Remove the bags from the Hippo heads. Remove marble storage cover that's under the pond

Attach each Hippo by sliding its front tabs into the pond. Press down to lock into place.

Fill each marble release area. Place the golden marble in any open area.

Wake up your Hippo by holding down its tail and pulling its neck out and downward.

Press and release the tail a few times.

Each player chooses a different Hippo, then places 5 marbles into the marble release area to the right of it. See Figure above for placement.

The youngest player goes first, by pressing his or her marble launcher to release one marble. Now all players quickly start pressing and releasing their Hippos' / tails, to try to make them gobble the marble!

After the marble is gobbled, the next player (to the left) launches a marble, and 1- all players try to make their Hippos gobble that marble. When all marbles have been gobbled up, players count the marbles in their marble collecting areas.

The player with the most marbles wins!

At the same time, all players launch all of their marbles, then quickly try to make their Hippos gobble as many as they can. When all of the marbles haven been gobbled up, the player with the most marbles wins. 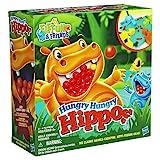 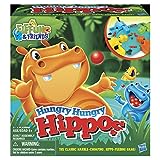