The aim of the attackers is to capture the king.

The aim of the defenders is to help get the king to a refuge square at the corner of the board. The refuge squares are red.

Moves are the same for all pieces.

A piece may move horizontally or vertically but not diagonally. The piece may move one or more squares, until it is stopped by the presence of another piece, a refuge square or the edge of the board.

The central square is the starting square for the king's fifth refuge square. No other piece may rest on this square but they may cross it if there is no other piece obstructing the other side of that square.

There are two sides.

The attackers arranged in groups of 6 at each side of the board, making a total of 24 and the defenders are arranged around the king in the center of the board. The king is on the central refuge square.

The attackers have the first move.

Capturingis by sandwiching an opponent piece horizontally or vertically between two of your own. This squashing process is referred to as "the hammer and anvil". Pieces cannot be squashed diagonally.

A piece can move between two opposing pieces into a sandwiched position and is then not taken. The opponent has to move a piece away and then carry out the hammer manoeuvre to take the piece.

The maximum number of pieces it is possible to take in one move is three.

A piece may be positioned where one move by the opponent would capture it but the player on move need not take that piece.

Taking is also possible by squashing an opposing piece between one of your pieces and a refuge square. The refuge square is then the anvil. It may be that the king is on the central refuge square in which case only an attacking piece may be taken using it as the anvil until the king has moved away.

If the king has left the central square then either attacker or defender may be squashed against that square and so taken.

Any piece that has been taken should be removed immediately from the board.

Taking the king is by surrounding him on all four sides.

It is permitted to capture the king on the central refuge square. (i.e. one attacking warrior on each of the four sides).

If the same position is reached on three separate occasions with the same player to move the game can be adjudicated a draw.

If a player is unable to make a legal move when it is their go then the game is drawn. 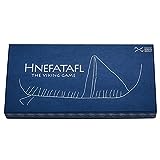 Hnefatafl: The Viking Game - Board Game 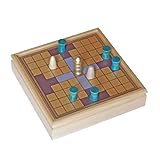