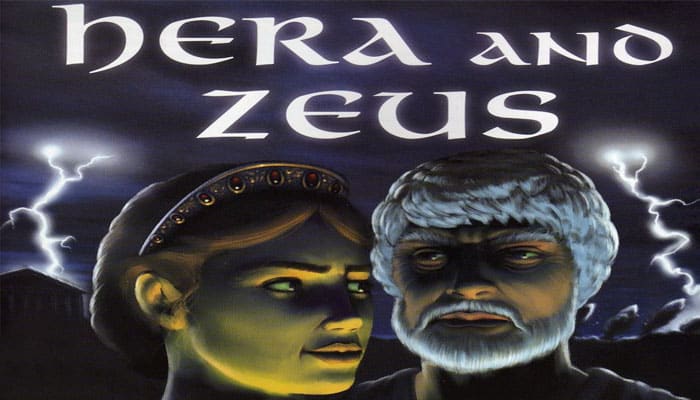 Zeus, the father of Gods, and his wife Hera often disagreed on matters both earthly and Olympic. Eventually, the disagreement became a full-fledged feud with both Zeus and Hera calling upon the other Gods from Olympus and mortals from earth to support him or her against the other.

Cyclops, Amazon, Medusa, Hydra, Pegasus, and others joined the feud. Both have taken a hostage (Hera has Io and Zeus has Argus).

The players take the roles of Hera and Zeus and use strategy and cunning to pit their allies against the allies of the other to rescue the hostages. It is winner take all for the rescue of the hostages and control of Olympus!

Each player has a deck of 43 cards. Most of the cards have a number from 0 to 7 in the upper right and left corners.

The number is the strength of the card in a challenge. The higher the number, the stronger the card. These cards are played face down when first played in the game.

Some cards have mythological symbols below the numbers.

These cards have special powers that are explained later and on the summary cards.

A few cards have the mythological symbol only in the upper left and right corners, but no numbers.

These cards are never played on the table, but are played for the special power they have and then discarded.

These special powers are explained later and on the summary cards.

For example, if a player starts his turn with 2 columns, he has 2 action points to use.

A player may take the following actions for the cost of 1 action point each:

A player may take any specific action as often as he has action points to spend. The actions can be taken in any order.

For example, a player may (with 3 action points) draw a card, challenge an opponent's card, and then draw another card.

A player must spend all action points he is allowed. He cannot save them for later or refuse to use them.

Note: If a player begins his turn with no cards on his side of the playing field, he loses the game (see Ending the Game and the Winner)!

Draw one card costs one action point. The player takes the topmost card from his card deck and adds it to his hand. A player may have at most twelve cards in his hand. When a player has exhausted his card deck, he may no longer use this action.

The player may play the card in front, behind, or between cards in a column on the playing field.

If a player wants to play a card where another card lies, he moves that card, and other cards behind it, backward (towards himself) to make room for the new card. After a new card is played, the cards in the column must all be next to each other with no empty spaces.

A player may not voluntarily remove one of his cards from the playing field. Therefore, a player must carefully plan each of his moves.

As indicated above, a player may move a card by placing a new card. Also, playing Dionysus allows a player to rearrange cards within a column or columns.

Remember: Each player's side of the playing field may have only 4 rows and 3 columns.

A player may look at his face down cards at any time.

Challenge an opponent's card costs one action point. Players may only use challenges beginning with their second turns in the game.

Play a Mythology card costs one action point. The player places the card in his discard pile after using its power.

When the opposing columns from the two opponents both have cards,a challenge is possible. A player may not challenge an opponent's card diagonally.

A player is not obligated to initiate a challenge unless no other action is possible.

Note: Players may not use the challenge action during the first round.

Only cards in the players' first rows may challenge (except Pegasus) or be challenged Io, Argus, Medusa, and Pandora may never initiate a challenge.

The player who initiates the challenge slides the challenging card forward (toward the challenged card), turns the card face up (if it was face down), and announces the strength of the card.

His opponent turns the challenged card face up (if it was face down) and announces its strength. The card with the higher strength wins the challenge.

The losing player puts the defeated card face up on his discard pile. The winning card remains face-up in the first row and may challenge again in this round.

When the two cards have equal strength, both are discarded by the players. When a card loses a challenge and is discarded, the player moves the cards in that column forward to fill the empty space.

If the card is played after the player has used one or more action points, he does not get four more but treats his turn as though he had four to start with.

The player pays no action points to play the card. The card is discarded when played. Then, the player places his Hera or Zeus figure in his 1st row, replacing the card there. The player then moves all the cards in that column, including the card in the 1st row, back one space.

Once a figure has been placed, the player may not move his figure, even with Dionysus. However, he may remove his figure as one of his actions. Neither player may initiate a challenge, including a Pegasus from his hand, in a column that has a figure in it.

To remove the Hera or Zeus figure from an opponent's 1st row, a player must challenge the figure with a Pegasus card from his hand.

When a player does this, he immediately discards the Pegasus card and his opponent removes the Hera or Zeus figure from the playing field. The figure remains on the player's side of the table as it may be used again.

The opponent then moves the cards that were behind the Hera or Zeus figure forward in the column to fill the empty space.

As long as a player has his Hera or Zeus figure in his 1st row, he gets four action points to use per turn, regardless of the number of columns he has.

Medusa may only be defeated in a challenge by Hero or Amazon.

When any card, except Hero or Amazon, challenges Medusa, the card loses the challenge and is discarded. Medusa remains face-up on the playing field.

Medusa is a strong passive card.Medusa can never initiate a challenge.

Pandora, with her famous box, is a very dangerous card - for both the player and his opponent.

When any card challenges Pandora, all cards in that column are lost and discarded. Each player determines the order in which the cards are placed on his discard pile.

If Io or Argus is in the affected column, the player who loses Io or Argus loses the game.

When a player challenges a card in his opponent's hand with Pegasus and selects Pandora, the opponent loses all cards from his hand and places them on his discard pile in the order he wants.

If Io or Argus is in the opponent's hand, the opponent loses (see Ending the Game and the Winner).

Pandora can never initiate a challenge.

In a challenge, Pegasus has a strength of only 1. Pegasus' real value to a player is that of a scout.

Pegasus may be used in several ways:

Pythia can spy on an opponent's cards and is the only card that is stronger than Nemesis and Poseidon.

Pythia may be used in several ways:

A player can use Sirens to seduce his opponent's allies to join his side in the conflict.

He places the card in his hand and may play it on this turn or a subsequent turn as if it were his own card. The player immediately discards the Sirens card. If the topmost card in the opponent's discard pile is not a card of strength 1-7, a player may not play Sirens.

Note: as the back sides of the cards are different, the opponent may easily identify "his"card in the player's hand.

A player may use Hades to take back a card from his discard pile.

For one action point, a player may use Hades to search his discard pile and take one card back into his hand. The card taken may be played immediately or on a subsequent turn.

The player need not tell or show his opponent which card he took. The player immediately discards the Hades card.

A player may use Persephone to retrieve Pegasus cards from his discard pile.

For one action point, a player can use Persephone to take up to 3 Pegasus cards from his discard pile and put them in his hand, which he may use on this or subsequent turns.

If there are fewer (even 0) Pegasus cards in a player's discard pile, he takes all of them. The player immediately discards the Persephone card.

A player may use Dionysus to change the positions of cards on his side of the playing field.

For one action point, a player may use Dionysus to move one of the cards on his side of the playing field to a different column. He may place the card in front of, between, or behind the cards in the new column.

The player can also use Dionysus to move one of the cards on his side of the playing field within the column it is in. He may place the card in front of, between, or behind the cards in the column.

The game can end in several ways: