The starting component represents your pilot cabin. It has 4 universal connectors, making it easy to build on to. The Warehouse is full of other components you will want on your space ship.

You can add additional cabins to your ship, allowing you to have a bigger crew. Bigger crews are better so you want to have as many cabins as possible.

Engines have special limitations: the exhaust pipe must point to the rear of the space ship (toward the player) and no component can sit on the square behind the engine.

This means that the exhaust pipe either opens into an empty square or the edge of the building zone.

Ships with more engines are faster, so you want as many engines as possible.

Cannons can point in any direction, but they are most effective when they point forward (away from the player).

No component can sit on the square in front of the cannon's barrel.

Many dangers await you on your journey. You may be in combat, or you may need to blow up meteors. That's why you want as many cannons as possible, especially forward-pointing ones.

The space ship 's exterior limits the number of engines and cannons that can be added, high-powered components have been developed to increase speed and fire power beyond conventional maximums.

Energy for double engines and double cannons is stored in size E batteries. (The "E" is for "E-normous").

A battery component will have 2 or 3 E-cells. Each E-cell stores enough energy to power one use of a double engine, a double cannon, or a shield.

Batteries can be anywhere on the ship; they do not have to be next to the component they are powering.

To get the most from your ship, you'll need double cannons and double engines , which means you will want as many batteries as possible.

Shields are there for when things go wrong. They can deflect smaller meteors and typical hits from enemy cannons. They get their power from batteries.

One shield generator can protect the ship on two sides: the ones that are glowing green in the picture. It works from any place on the ship. All that matters is which way it is oriented.

Now you are probably expecting us to say you want as many as possible. Of course not.

You only need two shield generators, provided they are oriented to cover all four directions. In fact, if you are gutsy (or suicidal) you can fly without any shields at all.

Cargo holds come with 2 or 3 containers. You can put them anywhere. They can be used to store the goods that you find along the way.

Of course, goods translate into profits, which is what this journey is all about, so you want as many cargo holds as possible.

Hazardous materials can only be transported in reinforced containers, which are found in special cargo holds. (These holds only have 1 or 2 containers ).

Hazardous goods are the most valuable, so it is important to have a lot of special cargo holds.

Structural modules don't seem very important because they don't do anything.

However, they have a lot of connectors, many of them universal. Structural modules can make your ship more durable so that it doesn't fly apart the first time it gets hit by something.

Don't worry about these other components right now.

On your first flight, you can treat them just like structural modules. 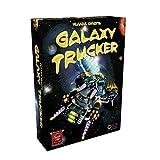