As one of the last few great Captains, you are working to bring prosperity to the Flotilla that houses the last remnants of human civilization.

You will explore the new face of the ocean, salvage whatever you can from the depths, rescue any survivors you come across, build your crew, gain influence with the Flotilla's governing Guilds...and perhaps eventually take what you've gathered and add it to the actual Flotilla itself by joining it with your watercraft and continuing to build the new world!

Flotilla features two distinct modes of gameplay-the Sinkside and the Skyside. All players begin the game as Sinksiders but may choose to "turn" Skyside at any time. When turning, you will flip many of your game components over, and fill a different role for the rest of the game!

Each time a player turns, the game's dynamics and opportunities will change! And remember, you do not have to "turn" at all!

When the Victory Point (s.jpg) supply runs out, finish the current round so that all players have had an equal number of turns. Then, each player takes one final turn. At the end of the last round, proceed to final scoring. The player with the most

If you would score

after the supply runs out, instead take those

Beginning with the First Player, you will play a single Crew card from your hand (see below), fully resolve its effects, and place it faceup into your discard pile. Then, play passes clockwise to the next player, and proceeds in this fashion until the end of the game.

The Crew card you play each turn will be the source of a majority of your action in the game, and the way you sequence them can be very important. All players begin with the same six "Starter" Crew cards, but can recruit new Crew during the game.

First you will resolve the "Sail" or "Income" effect. Then, resolve its ability as printed.

The Captain card allows you to Rally your crew. To Rally, simply pick up all of the Crew cards in your discard pile, and return them to your hand.

As a Sinksider, whenever you use your Captain to Rally, you may choose to "turn" Skyside and join the Flotilla.

The Scholar card allows you to exactly copy an opponent's Topside card (the top card of their discard pile). This duplicates the card effect, and also the Sail or Income value on that card.

For reference purposes, the Scholar belongs to all Guilds and counts as such for effects that check its affiliation.

Each Crew card from the Speakers' Guild will allow you to gain Influence on the Guild Tracks.

To gain Influence with a Guild, advance your Guild Influence Tracker disc clockwise along the Guild board's appropriate Guild Ring Track. Notably, each Guild Track features an arced arrow: You may choose to skip the third space if you wish.

When advancing along the Guild Ring Track, you will gain the bonuses indicated on each space your tracker touches. (When opting to skip the track's third space, you do not gain its bonus!)

Draw one Ocean Tile from the bag. If you are a Sinksider, you may immediately place that tile; as a Skysider, it is added to your Reserve. Don't forget to take any Toxicity indicated on that tile.

Advance the Survivor tracker by one space, and gain any bonuses you pass or land on.

Gain the currency and/or

indicated on the space.

Gain one resource of any type, and add it to your reserve on your Player Board.

. At the end of the game, the player with the most Seals in a Guild will earn 10

Take the top Crew card from this Guild's slot on the Guild Board, and add it to your hand. This new member is a permanent addition to your Crew. If you would ever need to recruit a Crew card, but the deck is empty, you instead gain 2

Influence is the primary way to recruit new Crew cards, so paying attention here can allow you greater flexibility and greater focus on your long- term goals.

Crew cards from the Traders' Guild will often allow you to gain currency, and then also make a certain number of Transactions.

A single Transaction can be used to perform any of the following actions:

Resource barrels on your Skiffs are considered cargo, and cannot yet be sold at the Market. You must first drop that cargo off at your Starting Tile's drop point (

) to add it to your reserve.

Sinkside and Skyside Founders work differently, but they all allow you to acquire Ocean Tiles in some way: by Drawing, Placing, or Building them.

Draw the indicated number of tiles at random from the Ocean Tile bag. If an effect specifies that you may then "keep" a certain number of those, then simply return the excess tiles to the bag.

While Sinkside, Founders will allow you to place the tiles you draw (see below). While Skyside, any tiles you draw are placed into your reserve, so that you can later Build them.

Whenever you draw an Ocean Tile, check it for Toxicity (

), and advance your Toxicity tracker that many spaces forward. For more information on Toxicity, see page 13.

Note - You take the Toxicity shown on all tiles you draw, regardless of how many of them you keep. You also take Toxicity as shown while Skyside, even though the Toxicity value is only printed on the tiles' Sinkside facings.

When a Founder or other game effect allows you to place one or more Ocean Tiles, you may place those tiles onto the playing area, obeying the following rules:

Each Sinkside tile will feature some or all of the following attributes:

A A Depth value (indicated by

Depth determines how you may place the tile, and also what type of die is rolled when diving for resources at that tile.

B A Toxicity value (indicated by the number of

C A Resource type (indicated by the colored barrel icon in the placard). This resource type shows what color resource you will acquire when diving at this tile.

D Up to one Island, which features a Construction Site.

E An Artifact wedge (indicated by the yellow, red, or purple Artifact circle). When you complete a full circle of Artifact wedges that share a color, you' ve discovered a culturally significant artifact from the lost world, and immediately draw a tile from the Artifact bag.


Building an Ocean Tile (Skyside Only)

When a Founder or other game effect allows you to Build an Ocean Tile, take the following steps:

When you build a tile as a Skysider, score (A x B)

Each Skyside Ocean Tile will feature some or all of the following attributes:

A A Cost Placard. Pay these resources when building the tile from your reserve.

B A District Type, determined by the color of resources the tile costs to build, and by the coloration of its features.

C Watercraft. These graphical features represent the new areas you're adding to the Flotilla.

Watercraft can be extended by placing further adjacent tiles-all sections of watercraft that visually appear to be connected are considered to be part of the same watercraft, even if they are different district types. Once a watercraft is fully surrounded by water, it can no longer be extended.

Note: these watercraft are considered to be separate, as they do not connect to one another.


D Up to one Construction Site. Much like Islands, these sites can house Outposts.

E Up to one Building. These Buildings allow for greater scoring for their Watercraft.

). When you complete a full circle of three Sonar Stations, you may advance the Sonar tracker and gain the indicated

Sinkside and Skyside Delvers are very different, but each allows you to roll dice in some way.

While Sinkside, Crew cards from the Delvers' Guild will allow you to Dive from your Skiffs to gather resources from the depths.

Each Delver Crew card will modify the basic Dive action, typically by adding extra dice to your roll.

When diving, you will roll Dive dice, which come in three types:

To Dive, take the following steps:

1. Gather your Dive dice, to include:

2. Roll those dice, and immediately gain the indicated results (in any order):

Choose one of your Skiffs that is currently on an undepleted tile, and add one resource barrel to that Skiff. The type of resource is determined by the resource type printed on that Skiff's tile.

Important: Each Skiff may hold no more than four resources at once.

Advance your top Toxicity tracker one space on your Toxicity Track.

For every Depletion icon that you roll beyond the first, place a Depletion marker on an undepleted tile where you have one or more Skiffs.

If you need to place more Depletion tokens than you have Skiffs, then you may choose any of your undepleted tiles to place those excess tokens. You can no longer Dive for resources at a Depleted tile!

Advance the Survivor tracker disc one space clockwise around the Survivor Track, and gain any bonuses you land on or pass.

Check the position of the tracker disc on the Sonar Track. Treat all instances of this icon as though it were the icon (or set of icons) indicated on the Sonar tracker's current space.

As the Sonar Track advances, this value can improve greatly!


As a Skysider, Crew cards from the Delvers' Guild will now be focused on delving technologies from recovered salvage!

As technology is one of the most coveted things in the new world, Delvers can be a great source of currency, and can also improve the world for everyone.

However, research is not always reliable! When playing a Delver as a Skysider, you will roll a certain number of Research dice, then manipulate and resolve those dice as the card indicates.

, or even trigger game-changing events. Each icon on the dice you roll can only be used once.

If you roll three Breakthrough results, you make a technological breakthrough. You may immediately increase any one Guild Dial by one, which will increase scoring for tile placement for all Skyside players.

If you roll three or more dice showing like-colored Guild icons, you have discovered knowledge pertinent to that matching Guild, and will receive its bounty!

Immediately gain the bonuses printed on all of the Artifact tiles that have been slotted into the central board near that Guild's dial.

For example, if two Delver artifacts have been discovered over the course of the game, then you would receive a total of 2

for rolling a set of three blue Research dice results.

Wild Research: One facing on each die does not feature a Guild icon, but instead features a wild icon. After you roll your dice, you may choose which color you would like this die to count as. It cannot count as more than one color, and you cannot count it more than once.

There are additional special rules. You can find them here.

Once all of the

have been taken from the supply, players finish the current round so that all players have had an equal number of turns. Then, each player takes one final turn after this.

During these final rounds, if a player would need to gain

, they instead take it out of the

reserve that was set aside during setup.

To calculate your final score, gain/lose

for a Guild if you have no Seals at that Guild. In case of a tie for the most Seals, the player with the least Toxicity breaks the tie. Further ties are friendly, where all tied players receive the best bonus they qualify for. (In cases where a friendly tie occurs for most Seals, no

are awarded for second-most Seals).

Should a tie persist, all tied players share the victory. 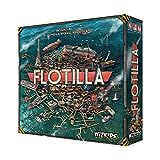