It was an ambush. That's the only way to describe it. The mothership appeared out of nowhere, creating a massive shadow over the city. Within seconds, wave after wave of fighters poured out of it, filling the sky.

We're launching the ships we have ready, but it isn't much. Our pilots fight bravely, defending the planet, while we ready the rest of the fleet. Explosions fill the sky, and we've taken some hits, but we won't give up. Will you?

Flip Ships is a cooperative dexterity game where players take on the roles of brave pilots defending their planet from an onslaught of firepower. Flip your ships to take out the encroaching enemies, and to take down the powerful mothership before it's too late.

1 If playing a 2 player game, flip all six interlocking Battle Zone Tiles to the side with the two dots in the lower right corner.

If playing a 3-4 player game, flip all six tiles to the opposite side. Connect the tiles as shown, and place them so that the illustration of the city is lined up with the edge of the table. These tiles will create the spacing for the rows of enemy ships that players will be battling.

There are three main sections shown on the Battle Zone Tiles:

2 Take the Pilot Cards, and shuffle the 1s, 2s, and 3s into separate decks. For each player, deal one card from each deck and line them up to the right of the 'Battle Zone Tile as shown.

If you are playing on a narrow table, these cards can be placed anywhere else out of the field of play, usually somewhere behind the mothership.

Each player chooses a color and takes the Ships (discs) of that color, placing them on the appropriate cards in a single column. Level 1 ships are placed on the Level 1 Pilot Cards, etc.

3 Each player takes two of their Level 1 ships from the Pilot Card and places them on the table just above their Level 3 ships. This area is where players will keep their active ships until they are ready to attack with them.

Note: In a 2 player game, each player takes all three of their Level 1 ships.

4 Place the docking bay near the pilot cards.

5 Shuffle the enemy cards together and deal cards into a on the number of players and your chosen difficulty level, based on the chart below. The remaining cards can be placed back in the box, and will not be used in this game.

From this Enemy deck, deal cards face-up to form two rows of

Enemy Ships next to the Moon spaces furthest from the edge of the table. Cards should be spaced about 1/2" apart. You can use the marking on the targeting computer card to be more precise, but it is not necessary.

The cards should be lined up so that the bottom edge of the cards are aligned with the bottom edges of the moon spaces. Place the remainder of the deck face-down to the right of the Moons (or somewhere out of the field of play if there isn't room there).

6 Build the mothership as shown in this illustration, and place it just above the middle card in the back row as shown, aligned with the top edge of the last Moon space.

The additional mothership piece (marked with a in the lower right corner) can be placed back in the box, as it is only used in the competitive speed variant described at the end of these rules.

8 Place the mothership health marker on the appropriate space, based on the number of players and the difficulty level you have chosen, as shown in this chart.

9 Place the targeting computer card somewhere within reach, but not within the field of play.

10 Construct the turn order marker, and place it just above the ships for the player in the left-most position.

11 Apply the stickers to the sides of the launch pad. The Launch Pad is not required to play, but can be added to any game. It is mainly used if the table you are playing on does not have a nice 90 degree edge to flip off of, but players can choose to use it in any game.

Even if the Launch Pad is not being used for most flipping, there is one ship ability that uses it, so leave it on the table where it is accessible.

Each round is broken up into 4 phases.

Each round, players will flip each of their active ships, trying to destroy Enemy Ships and attack the Enemy Mothership.

In turn order, as shown by the order of the ships along the edge of the table, and starting with the player with the Turn Order Marker above their ships, each player will flip their active ships.

Active Ships are the ships that are on the table above their pilot cards. After flipping all of their ships, a player will resolve their attacks. Play then proceeds to the next player, and will continue until all players have flipped and resolved all of their active ships.

To flip a ship, you must follow these rules:

Once a player has flipped all of their active ships, they will resolve their attacks.

After a player flips all of their active ships, they will proceed as follows:

Once the last player in turn order has resolved all of their attacks, move to the Enemy Marches Phase.

If any cards were knocked out of alignment during the Flip Ships Phase, straighten them out now.

Starting with the column closest to the Moons, and moving from front to back (from the atmosphere towards the mothership) each Enemy Ship will now move forward a number of spaces, as shown on the lower left corner of the card.


After moving the first column, proceed to the next column and so on until all five columns of enemies have been moved.

After moving all of the Enemy Ships, if any of them moved past the last Moon row and into the atmosphere area, these ships have damaged your city. Proceed as follows:

To prepare for the next round, do the following:

The Enemy Ships have been destroyed and you are making your final assault on the mothership. It is here that you will defeat the Enemy and be victorious... or be destroyed.

If players flip all of their ships and still have not attacked the mothership the required number of times, then the mothership attacks, doing 20 damage to your city. You lose.

Note: No Player Ship Powers May Be Used During The Final Assault.

In order to win, players must destroy all of the Enemy Ships (kamikaze ships in the final round are considered destroyed), and destroy the mothership. 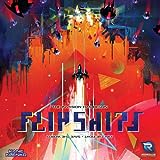