To win the game, you and your team will need to treat all the patients before time runs out.

1 Before your first game, attach the Life Support Dial to the center board piece as shown in the illustration. Once attached, you will never need to separate these pieces again.

2 Build the board by attaching the four Corner Board Pieces around the Life Support Dial in the center of the table.

3 Shuffle the Emergency cards and place them face-down on the table near the area of the board numbered 1 to 6 (near the 1). Place the Emergency Dice just to the left of number 1.

4 Shuffle the Patient Cards and deal a number of them into a face-down stack based on the number of players and the difficulty level you have chosen:

5 Turn the Life Support Dial so that the connection with the diamond is lined up with the first space on any one of the Patient Cards.

6 Place one Power Cube on each of the Recharging spaces on the board.

7 Take the Power Meter matching the number of players in the game, and choose to play the standard (green) side or the expert (red) side. This will impact the number of Emergencies that come out during the game. Place this tile, with the chosen side up, on the indicated space on the board. All unused Power Meters can be returned to the box.

8 Fill the Power Meter with the remaining eight Power Cubes, one per space on the meter.

9 Choose a player to be the Chief Medical Officer, and give them the player aid tile. This is usually the player who is most familiar with the game. Since you're reading these rules that will probably be you. Congratulations.

Note: In a solitaire game, choose 2 colors and set up the game identical to the 2 player setup.

11 Place the Cleared Tiles on the table, within reach of the Chief Medical Officer.

12 Place the Lock-Down Tiles next to the board. These will only be used if referenced on a card. See page 14 for details.

Each round of FLATLINE is broken into several phases, as noted on the Chief Medical Officer's player aid.

The Chief Medical Officer will lead the team each round through the following steps:

Note: A solitaire game is played as if two players are playing, it's just that one player is controlling both sets of dice. All rules remain the same as the two player game.

Take the left-most Power Cube from the Power Meter and remove it from the board.

Note: This tracker will show you how many cards to draw in the next phase. Also, if you ever need to remove the last Power Cube from the Power Meter, you lose!

Below the Power Cube that was just removed is a number. This indicates the number of Emergency Cards that must be revealed.

Flip up the indicated number of cards from the face-down deck, and add them face-up next to the board following these rules:

Roll the two Emergency Dice, and place them in the Emergency area of the board, on the matching numbers. Any Emergency Cards in these slots are now activated. Resolve the cards from left to right (from 1-6).

Note: Rolling doubles only activates the cards in that space one time.

Players now discuss a strategy for the round, determining priorities and a plan of action. This phase has an unlimited amount of time, but if you like to feel pressured you could start the timer and limit discussion to one minute.

This phase is the main part of the game. The Countdown phase ends at the end of one minute, or when all players have placed their dice, whichever comes first.

During this phase you will be trying to save your patients, clear Emergency Cards, and/or utilize the Recharge Stations to earn extra rounds. You will do all of these by placing your dice on various parts of the board.

This phase begins as soon as the timer has run out. During this phase, players will resolve the cards in all areas of the board.

Beginning with cards in the Stat area, and then moving to the Emergency Area, resolve the cards.

Beginning with the Patient Card with the diamond on the Life Support connection, and continuing clockwise around the board, resolve each Patient Card and then each Recharging Station.

In order to clear a line on a Patient Card, the line must be treated completely during the round.

If a line does not have all of the required dice to complete it, then simply return those dice to the players. For each correctly completed line on a Patient Card, place a Cleared Tile over the line.

If this was the last line on the Patient Card requiring dice, then the patient has been successfully treated.

When a patient has been successfully treated (all lines on the Patient Card have been cleared), then the trigger space at the bottom of the Patient Card that is currently connected to the Life Support system is activated.

If the space is blank, do nothing.

If the space has a green light, then this is a benefit to the players.

If the space has a red light, the patient is still treated, but some other emergency has occurred.


After resolving the effect of the trigger, discard the Patient Card out of the game and replace it with the top patient card in your deck (if there are any left).

If these spaces were filled during the round, then move one of the Power Cubes from the Recharging Station to the right-most open space on the Power Meter.

Example: Since this is a three player game, the top row and the left-most space in the bottom row must be filled.

Note: The same as with Emergency and Stat Cards, any number of players can place dice on the Recharging Stations, including one player doing it by themselves.

Note: When resolving cards, Recharging Stations, or Patient Cards, the Chief Medical Officer will remove the dice and give them to the Intern. The Intern will sort the dice and return them to the appropriate players.

After resolving everything on the board and returning all dice to the players, turn the Life Support Dial one time clockwise. The easiest way to do this is to find the connection with the diamond and turn it so that it is now connected to the first space on the next patient in clockwise order.

After turning the dial the round ends. If there are any Lock-Down Tiles on the board, remove them. Make sure everyone has the correct number of dice for the next round, and then you are ready to begin the next round.

Note: All game effects from cards and other triggers last for one round only, and their effects end as soon as the Life Support Dial is turned.

The players win if they successfully treat all the required Patient Cards before time runs out.

The players lose if either of the following occurs: 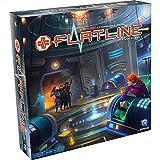