At the start of each game, you will choose an Episode box and an Elder One box and combine their components. The Episode will provide the map layout, the ritual you are trying to disrupt (and how to disrupt it), as well as the abilities of the monsters in the game.

The Elder One will provide the big boss you will fight, with its own challenges, along with its special minions. Do not combine elements from other boxes.

1 to 5 players will control investigators, cooperating to win or lose the game together. In each game, the goal remains the same: disrupt the ritual, then kill the Elder One.

Each episode has its own Episode cards, Mythos cards, and Discovery cards, as well as special tokens.

The back of each Episode card shows how to set up the episode.

Each Elder One comes with its own flavor of Cultists and monsters, its own Mythos cards to mess with you, and Elder One cards in different stages that will unfold as the game goes on. You cannot attack the Elder One until the ritual is disrupted, even if it's been summoned to the board!

The Story board, used in every game, is the hub of information.


The Summoning track shows the progression of the Elder One as it manifests into our world. The Elder One figure starts on the left part of the track and progresses to the right.

If the Progression token reaches the end of the track, the Elder One dominates the word and the investigators lose!

Each episode has 15 Discovery cards. These include Items, Companions, and Conditions that can help or hinder you. Most Discovery cards can be claimed by fulfilling the requirements listed on the card's central section.

Investigators claim either the left or right side of the card, tucking them under their investigator board on the appropriate side

If it's not specified when the investigator may use an effect from a Discovery card, it may be used anytime during their turn. However, it cannot be used while resolving another card, effect, or during a roll.

Mythos cards drive the horrors of each game. You will grow to hate them. Half the Mythos cards in a game come from the Episode box and the other half comes from the Elder One box.

Each turn, after taking their actions, the active player will draw a Mythos card. Some will move and/or summon enemies. Others will drive you mad. There are also ones that aren't as kind.

The term "enemies" refers to Cultists, monsters, and the Elder One (once it's summoned to the board). Any enemy that's not a Cultist or the Elder One is a "monster".

Enemy cards show their health, the dice they use when attacking, and a special ability that may come into effect in different circumstances.

Each investigator has a board with a wound track, a stress track, a sanity track, and 3 skills. All are tracked with plastic tentacle markers in your color.

There are also slots on the right and on the left of the board to insert claimed Discovery cards. There is no limit to the number of cards that can be slotted to an investigator.

Stress is used to try and push situations in your favor. You may always increase your stress to reroll 1 die you just rolled. Many Discovery cards also have you take stress in order to claim them.

Generally, the only consequence of being at maximum stress is you can't take more stress (though some effects may deal you wounds instead).

If the marker ever reaches the skull at the end of your wound track, you are dead.

Your 3 skills allow you to bend the rules in your favor. The top one is you signature skill, unique to your investigator, while the other 2 skills come from a common pool (so other investigators may have the same ones).

All skills start at the first level, but you will increase them when you level up. Some skills replace a lower level skill as you level up, while others add to them, as described on the skill.

Whenever you lose sanity, the marker on your sanity track advances to the right. If it reaches the skull at the end, you are consumed by madness and eliminated.

The track has Insanity Threshold (

) spaces that will activate your insanity and level up a skill. Some of them also give you permanent bonus dice. When an investigator loses more sanity (from dice rolls, Discovery, or Mythos cards) than required to hit the next

, the marker stops at the

and all excess sanity loss is ignored.

Each tile is double-sided and labeled with a code to help with setup.

Spaces are defined by walls and passages. Some tiles contain 1 space while others contain 2 or 3.

On the board, you may only move through passages that have connecting arrows on both spaces. If there is only a passage on one side (or a passage leading off the board) and nothing on the other side, you cannot go through it.

There is no limit to the number of figures that may occupy each space.

Each map has 3 Gates - Red, Yellow, and Blue, where enemies are summoned.

Some maps contain a staircase or a tunnel. You may move from a space with one of these tokens to a space with the matching token. Spaces linked like that are considered adjacent for all purposes.

A space is Safe when there are no enemies in it. 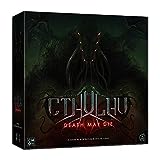 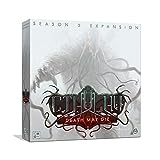 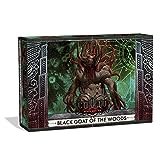 Death May Die The Black Goat of The Woods