Uncountable eons ago, at the dawn of a forgotten age, a race evolved at the heart of a spiral galaxy. Later, they would come to be known as the Precursors. They were the first intelligent life in the universe, and they were alone.

Their technology was nothing short of miraculous, and it allowed them to explore the universe as they sought out other sentient beings. However, their search was in vain.

Feeling the weight of their solitude, eventually the Precursors sent out probes to thousands of inhabitable planets. Each probe contained the seeds of life, with the hope that sentience would eventually follow.

After that, no one knows what happened to them. Perhaps they fell victim to some unknown threat, or perhaps they simply evolved beyond this universe. In any event, by the time the probes' "children" began to master space travel, the Precursors were gone.

They left behind a mighty legacy, however. At the edge of each solar system where they planted one of their 'seeds,' the Precursors left a cache of technology and a hyperspace gate. Through this gift, their children could find and communicate with each other.

And so they began to do so. Although the younger races did not completely understand the Precursor's technology, they were able to use it easily enough. Of course, without the guiding hand of the elder race, the younger races soon fell to squabbling among themselves.

Eventually this gave rise to the current age - the Cosmic Age.

Build a galactic empire... In the depths of space, the alien races of the Cosmos vie with each other for control of the universe. Alliances form and shift from moment to moment, while cataclysmic battles send starships screaming into the warp.

Players choose from dozens of alien races, each with its own unique power to further its efforts to build an empire that spans the galaxy.

Many classic aliens from earlier editions of this beloved game return, such as the Oracle, the Loser, and the Clone. Newly discovered aliens also join the fray, including Remora, Mite, and Tick-Tock. This classic game of alien politics returns from the warp once more.

In Cosmic Encounter, each player is the leader of an alien race. On a player's turn, he or she becomes the offense. The offense encounters another player on a planet by moving a group of his or her ships through the hyperspace gate to that planet. The offense draws from the destiny deck which contains colors, wilds and specials.

He or she then takes the hyperspace gate and points at one planet in the system indicated by the drawn destiny card. The offense vs. the defenses ships are in the encounter and both sides are able to invite allies, play an encounter card as well as special cards to try and tip the encounter in their favor.

A player does not need to have colonies in all of the systems, just colonies on five planets outside his or her home system. These colonies may all be in one system or scattered over multiple systems. The players must use force, cunning, and diplomacy to ensure their victory.

Cosmic Encounter is a game for three to five players (the more players the better), playable in one to two hours. In Cosmic Encounter, players take on the role of various alien races in a struggle for cosmic supremacy.

The players must use force, cunning, and diplomacy to ensure their victory. The winner(s) will be the first player(s) to have five colonies on any planets out- side his or her home system. Each alien has a special power that can be used to its advantage as players balance diplomacy, alliances, and force to gain new colonies. The winner of the game is the first player to establish five colonies on foreign planets. If two or more players establish their fifth foreign colony at the same time, they win together! â€¦

This section contains additional rules that players must understand to play Cosmic Encounter.

Each player has an alien sheet, which represents the alien species they are playing as. Each alien sheet includes the name of the alien and its unique power. The top of each alien sheet features upside-down text that provides a one-line summary of that alien's power for other players to read.

The bottom of each alien sheet indicates the prerequisites for using that alien's power. The upper blue bar indicates which role the player must have to use that aliens power (e. g., main player, defensive ally, etc).. â€¦

Once players are comfortable with the core rules of the game, they should add flare cards to their future games.

Flare cards provide players with powerful abilities that can be used repeatedly. Each flare has a blue bar indicating the prerequisities for it to be played. When a player plays a flare card, they use its wild ability.

However, if that player has the matching alien sheet, they must use the super ability instead.

Only the player who has the Kamikaze alien sheet can use this card's super ability. â€¦

This section contains variant rules that players can incorporate into their games of Cosmic Encounter if they desire. The variants can be used individually, or they can be combined.

If players wish to play a shorter game of Cosmic Encounter, they play the game following all the normal rules with the following exceptions:

This section contains a list of clarifications about components and some situations that can occur during the game.

Players must resolve alien powers and card abilities according to the specific phases indicated on the component for that power or ability.

If an alien power contradicts a rule from this booklet, the alien power takes precedence. â€¦ 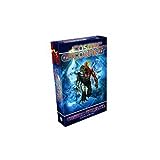