In Cartographers, players compete to earn the most reputation stars by the time four seasons have passed.

Each season, players draw on their map sheets and earn reputation by carrying out the queen's edicts before the season is over. The player with the most reputation stars at the end of winter wins!

The game is played over four seasons. Each season is divided into multiple turns, and each turn has three phases: the Explore Phase, Draw Phase, and Check Phase. At the end of each season, players earn reputation stars.

Reveal the top card of the explore deck and place it face up in the center of the play area, so that all players can see it. Place the new card on top of any explore cards already in play, displaying the cards in a column to ensure that the time values on all revealed cards are visible.

At the same time, each player independently chooses one of the terrain types and one of the available shapes depicted on the revealed explore card, then draws it on their map with a pencil.

Rift Lands: If the rift lands card is revealed, each player draws a 1x1 square anywhere on their map and fills it with any terrain type shown on the card.

All normal rules and restrictions apply.

Ruins: If one or more ruins cards are revealed, each player must draw one of the available shapes, depicted on the next explore card that is revealed, so that it overlaps a ruins space on their map (if possible).

If a player cannot legally draw one of the available shapes so that it overlaps a ruins space -OR- there are no unfilled ruins spaces left on their map, they must instead draw a 1x1 square anywhere on their map and fill it with any terrain type.

Ambush: If an ambush card is revealed, check the direction of the arrow shown on the card. Each player immediately passes their map sheet to their neighbor in that direction.

Each player draws the depicted shape on their neighbor's map, then fills the shape with the monster terrain type.

Then pass all map sheets back to their owners and discard the ambush card, returning it to the game box.

Check to see if the end of the season has been reached.

Add together the time values of all explore cards that are currently revealed in the column.


End of the Season

At the end of each season, players are evaluated, earning reputation stars based on how well they followed the queen's edicts.

Examine the current season card to see which two scoring cards to evaluate. For example, in spring, evaluate the scoring cards below edicts A and B.

If the current season is winter, the game is now over; proceed to the end of the game. Otherwise, prepare for the next season.


Preparing for the Next Season

Discard the top card of the season stack, returning it to the game box. This will reveal the next season card in the stack.

In this way, it is possible to have multiple ambush cards in the explore deck during later seasons.

Once winter has ended and players have been evaluated for the fourth time, the game is over.

In the event of a tie, the tied player who lost the least reputation stars to monster terrain across all four seasons is the winner. If there is a further tie, all tied players share the victory.

When scoring, keep in mind these general rules: 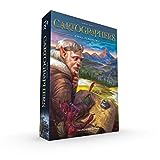