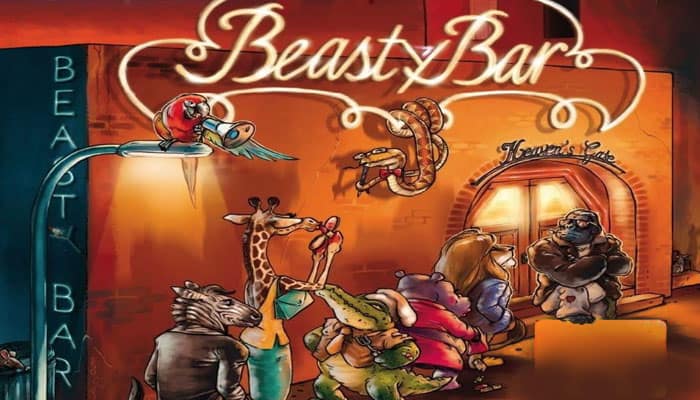 The parties in Como Dragon's Beasty Bar are legendary. Neither the big beasties nor the small ones want to miss them. But you can get in only if you leave enough guests waiting in line behind you.

And the animals are already pushing and shoving and baring their teeth. Will the crocodile bite its way ahead? Or will the skunks' odor cocktails be too over- whelming? And the chameleons will probably make complete monkeys of themselves!

Even the manes of the party lion regulars stand up when the next best seal opens up a new way in...

Your animals want to go to the party. To this end, they have to bear up against the pushing and biting rivals at "Heaven's Gate", the portal to the Beasty Bar.

Whenever the line has increased to five animals, the first two animals in line gain admission - and the last in line is excluded. The player who is able to get the most animals into the bar wins.

The player with the wildest outfit begins. Then play proceeds in turn, in clockwise order. On your turn, you perform the following five actions in this order:

Choose one animal card from your hand and place it face up at the end of the line in the Jostling area. If the Jostling area is currently empty, the animal played opens a (new) waiting line in front of Heaven's Gate.

Explanation: In the Jostling area, all played cards - put next to one another face up - form a "waiting line". Each newly played animal first has to get in line, that means, further away from Heaven's Gate than all the animals already laid out (see example 1). The Jostling area can never contain more than 5 animals.

Example 1: You place your giraffe into the Jostling area; it has to get at the end of the line.

2. Execute the animal action of the played card

Now execute the action of the animal you just played, if possible.

Example 2: You move the giraffe you just played past the parrot, according to its animal action.

. Actions of hippo, crocodile, and zebra have to be carried out again on every subsequent game turn of each player, if possible.

Example 3: The "recurring" action of the hippo has no effect. The red giraffe jumps over the monkey. The yellow giraffe doesn't, since it has just been laid out on the current turn.

After carrying out all recurring animal actions, you now check whether the waiting line consists of 5 animals. If there are less than 5 animals in line, nothing happens. Play immediately goes on with action 5: "Draw another card".

If the waiting line consists of 5 animals, Heaven's Gate opens; and the exclusion takes place as well:

Please note: Animals can also have to go "directly" from the Jostling area to the THAT'S IT card thanks to the actions of other animals.

In this case, too, the remaining animals in the Jostling area are shoved toward Heaven's Gate.

Example 4: After all "recurring" actions have been carried out, there are 5 animals present in the Jostling area. Heaven's Gate opens for the hippo and the red giraffe and allows them to enter the bar.

The parrot is excluded since it is the last of the 5 animals waiting in line, and it lands on the THAT'S IT card.

The game ends as soon as all players have completely played out their animal cards. The player who has the most guests (his own animals) in the Beasty Bar wins.

If several players end up in a tie, these players add up the card values of their bar guests; then the player whose guests have the lower overall value wins. There can be more than one winner.

The overview cards are placed with their backs up. The number of points indicates how many points the owner of an animal gets if this animal reaches the Beasty Bar.

In this game variant, differing from the normal game rules, each player sorts out 4 animals of his choice before the game begins. He does not tell the other players what these animals are, and puts them face down back into the game box.

The remaining eight animals per player are then used for play according to the normal rules. The player who scores the most victory points with his party guests in the Beasty Bar wins.